Persistent Data Structures preserve previous versions of themselves allowing us to revisit and audit any historical version. While we already did an exhaustive introduction in the previous essay, in this essay, we take a detailed look into how we can implement the Fully Persistent variant of the most common data structure - Arrays.

The essay is loosely based on the paper titled Fully Persistent Arrays for Efficient Incremental Updates and Voluminous Reads by Tyng-Ruey Chuang and we implement it using Backer's trick elaborated in the paper A Persistent Union-Find Data Structure.

An array is an abstract data structure consisting of n slots to hold a maximum of n elements such that each element is identified by at least one index. A typical array allows the following functions - create(n), update(index, value) and get(index).

The simplest form of an array, that we all are familiar with, is the Linear Array that is designed to hold elements in consecutive memory locations, leveraging spatial locality for faster and more efficient retrievals and scans. Before we jump into the implementation details of Fully Persistent Arrays, let's reiterate what exactly are Fully Persistent Data Structures.

A naive way of implementing these arrays is to do a Copy-on-Write and keep track of historical versions. This approach very inefficient as it requires m times the memory required to hold n elements, where m is the total number of versions of the array. 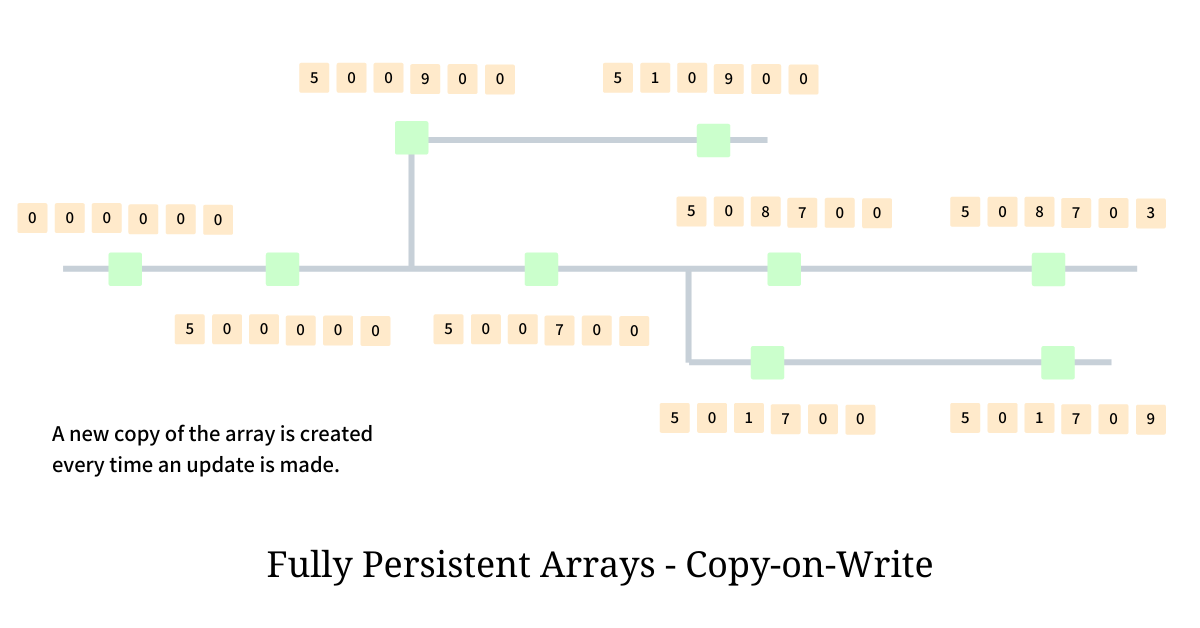 A better way of implementing these arrays is by using the Backer's Trick which enables the required functionality with just one array and a tree of modifications.

A more efficient way of implementing Fully Persistent Arrays is by using a single instance of an in-memory Array and in conjunction use a tree of modifications. Instead of storing all the versions separately, Backer's trick allows us to compute any version of the array by replaying all the changes asked for.

The tree of modifications is an n-ary tree that holds all the versions of the array by storing only the modifications made to the elements. Each version is derived from a parent version and the root points to the in-memory cache array which holds the initial version of it. 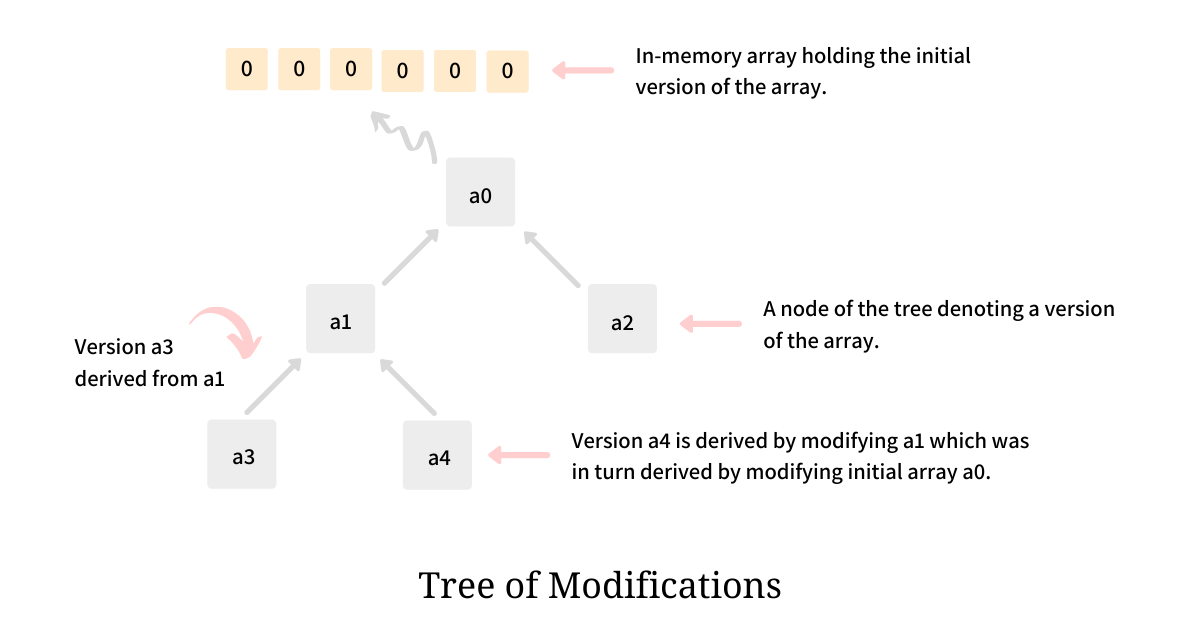 Each node of the tree holds three fields - index, value, and a pointer to the parent, making this tree pointing upwards towards to root. Thus each node holds the changed value, where did the change happen index and on which version the change happened parent. 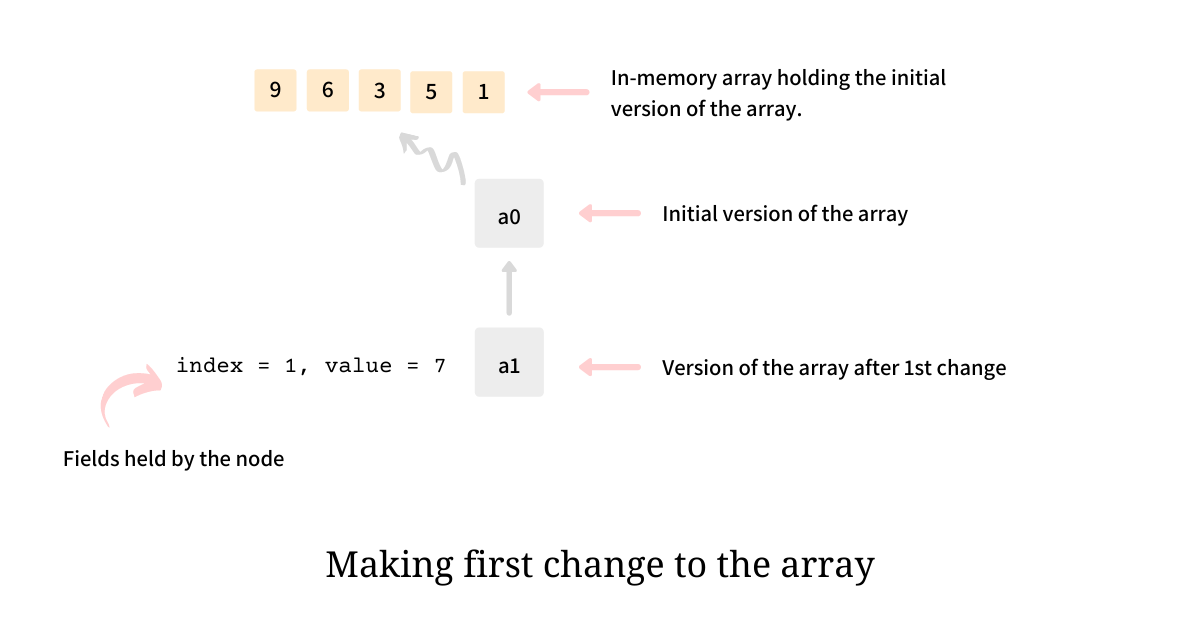 The node a1 has 3 fields, index set to 1, value set to 7 and parent pointing to a0. The node implies that it was derived from a0 by changing the value of the element at the index 1 to 7. If we try to branch off a0 with another change say index 4 set to value 9 we would have 3 nodes in the tree. Thus we see how an update translates into just creating a new node and adding it at the right place in the tree.

Now we see with this design how we implement the three functions of an array create, update, and get.

The create function allocates a linear array of size n to hold n elements. This is a usual array allocation. While doing this we also create the root node of our tree of modifications. The root node, as established earlier, points to the cache array.

The overall complexity of this operation is O(n) space and O(n) time.

The update operation takes in the index that needs to be updated, the value, and the version of the array on which update is to be made.

To do this efficiently, we create a new node in the tree whose parent is set to the array version on which update is performed, index and value are set what was passed during invocation. Thus we see that the update operation takes a constant O(1) space and O(1) time to create and represent a new version of the array.

With the update operation being made efficient we have to trade-off get operation.

The overall complexity of this operation is O(1) space and O(n) time.

We established that the update operation takes constant time and reads are expensive. If our system is write-heavy, then this is pretty handy but if the system has more reads then operation taking O(n) time hampers the overall performance of the system. So as to optimize this use case we take a look at the operation called Rerooting.

The initial array (the first version of the array) has no significance to be the root forever. We can reroot the entire tree such that any child node could become the root and the value it points to - cache - represents the true copy of the array. Rerooting is a sequence of rotations to make the desired array version the root.

The algorithm for rerooting is a classic Backtracking algorithm that requires updates in all the nodes coming in the path from the old node to the new node. 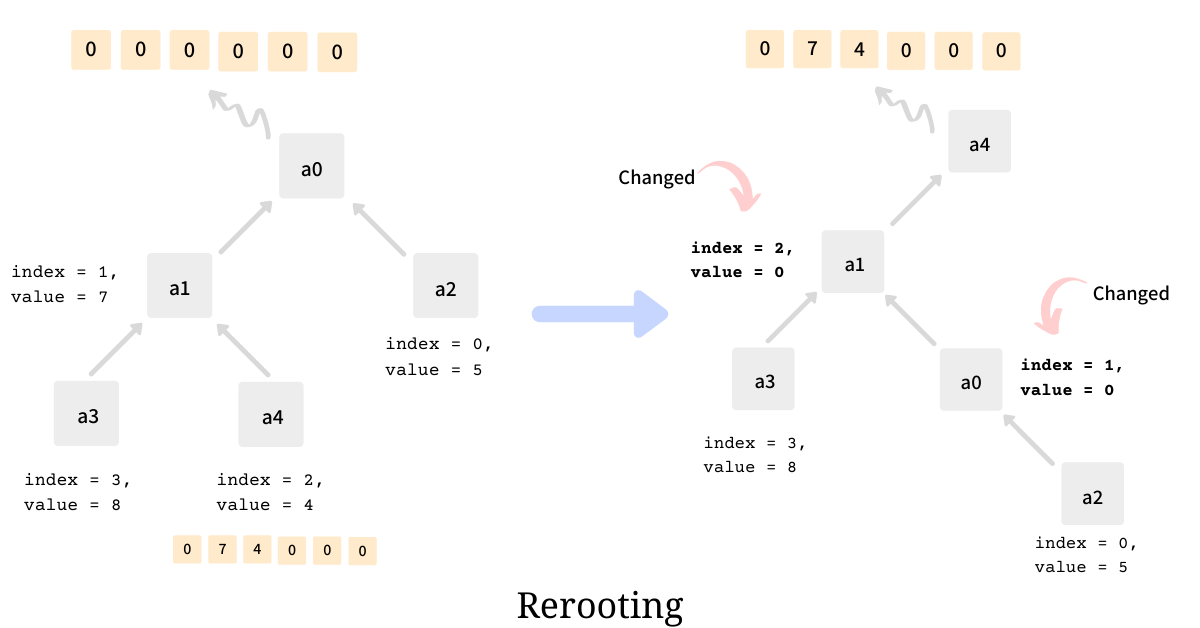 The rerooting operation takes time proportional to the distance between the old and new root ~ O(n). Since the successive reads are happening on the same version the get operation becomes O(1) as well. Thus depending on the kind of usage of the system we can add rerooting step in either get or update operation.

The most popular implementation of the LFU Cache Eviction Scheme, using a min-heap, implements all three operations with...