Copy-On-Write, abbreviately referred to as CoW suggests deferring the copy process until the first modification. A resource is usually copied when we do not want the changes made in either to be visible to the other. A resource here could be anything - an in-memory page, a database disk block, an item in a structure, or even the entire data structure.

CoW suggests that we first copy by reference and let both instances share the same resource and just before the first modification we clone the original resource and then apply the updates.

The process of creating a pure clone of the resource is called Deep Copying and it copies not only the immediate content but also all the remote resources that are referenced within it. Thus if we were to deep copy a Linked List we do not just copy the head pointer, rather we clone all the nodes of the list and create an entirely new list from the original one. A C++ function for deep copying a Linked List is as illustrated below 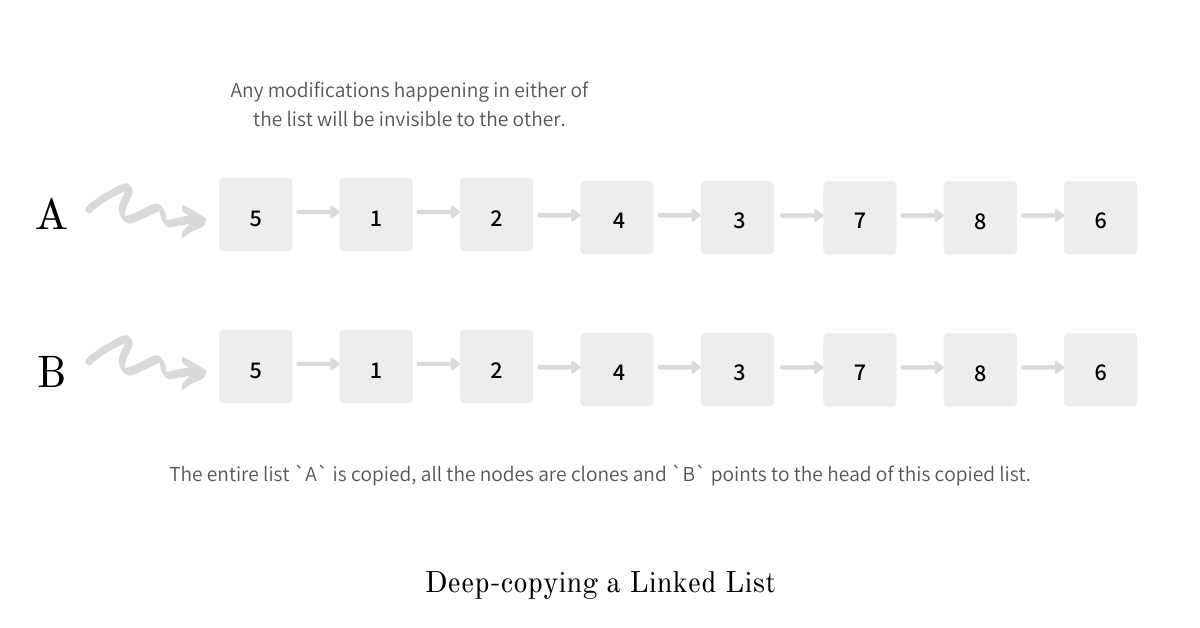 Going by the details, we understand that deep copying is a very memory-intensive operation, and hence we try to not do it very often.

Copy-on-Write, as established earlier, suggests we defer the copy operation until the first modification is requested. The approach suits the best when the traversal and access operations vastly outnumber the mutations. CoW has a number of advantages, some of them are

By having a CoW, the process need not wait for the deep copy to happen, instead, it could directly proceed by just doing a copy-by-reference, where the resource is shared between the two, which is much faster than a deep copy and thus gaining a performance boost. Although we cannot totally get rid of deep copy because once some modification is requested the deep copy has to be triggered.

A particular example where we gain a significant performance boost is during the fork system call.

CoW gives us an optimistic way to manage memory. One peculiar property that CoW exploits are how, before any modifications to the copied instance, both the original and the copied resources are exactly the same. The readers, thus, cannot distinguish if they are reading from the original resource or the copied one.

Since there are no modifications, in CoW, the deep copy would never happen and hence the only operation that ever happened was a super-fast copy-by-reference of the original resource; and thus we just saved an expensive deep copy operation.

One very common pattern in OS is called fork-exec in which a child process is forked as a spitting copy of its parent but it immediately executes another program, using exec family of functions, replacing its entire program space. Since the child does not intend to modify its program space ever, inherited from the parent, and just wants to replace it with the new program, deep copy plays no part and is a waste. So if we defer the deep copy operation until modification, the deep copy would never happen and we thus save a bunch of memory and CPU cycles.

Locks are required when we have in-place updates. Multiple writers try to modify the same instance of the resource and hence we need to define a critical section where the updations happen. This critical section is bounded by locks and any writer who wishes to modify would have to acquire the lock. This streamlines the writers and ensures only one writer could enter the critical section at any point in time, creating a chokepoint.

If we follow CoW aggressively, which suggests we copy before we write, there will be no in-place updates. All variables during every single write will create a clone, apply updates to it and then in one atomic compare-and-swap operation switch and start pointing to this newer version; thus eradicating the need for locking entirely. Garbage collection on unused items, with old values, could happen from time to time. 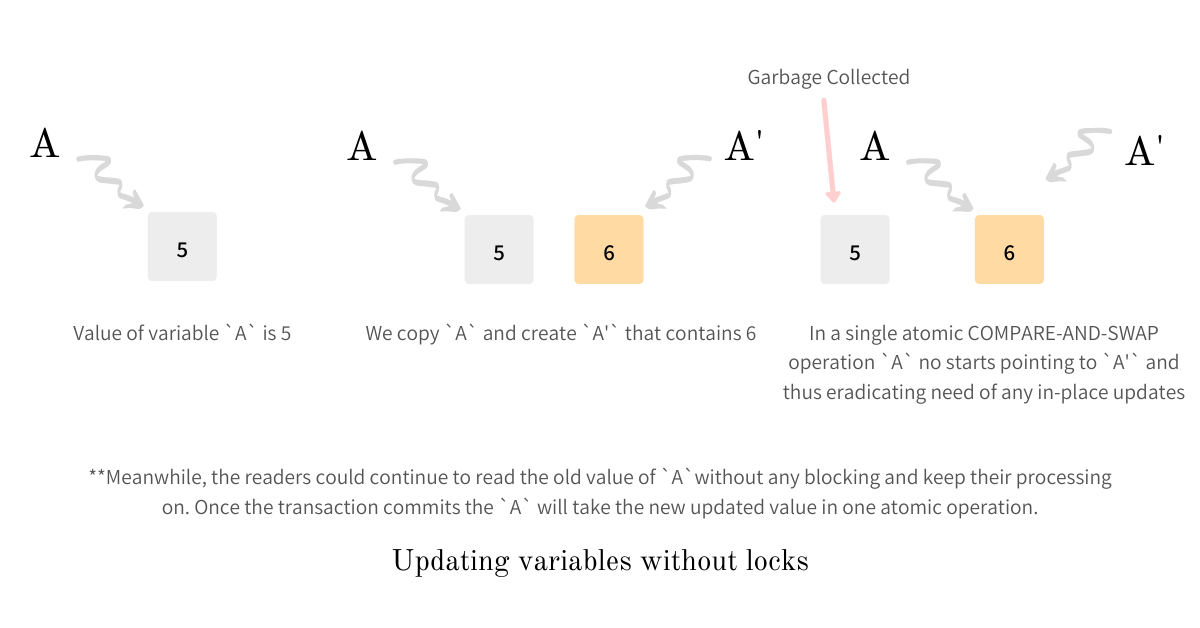 Versioning and point in time snapshots

If we aggressively follow CoW then on every write we create a clone of the original resource and apply updates to it. If we do not garbage collect the older unused instances, what we get is the history of the resource that shows us how it has been changing with time (every write operation).

Each update creates a new version of the resource and thus we get resource versioning; enabling us to take point-in-time snapshots. This particular behavior is used by all collaborative document tools, like Google Docs, to provide document versioning. Point-in-time snapshots are also used in the databases to take timely backups allowing us to have a rollback and recovery plan in case of some data loss or worse a database failure.

CoW is just a technique and it tells us what and not how. The implementation is all in the hands of the system and depending on the type of resource being CoW'ed the implementation details differ.

The naive way to perform copy operation is by doing a deep copy which, as established before, is a super inefficient way. We can do a lot better than this by understanding the nuances of the underlying resource. To gain a deeper understanding we see how efficiently we could make CoW Binary Tree Binary Tree.

Efficient Copy-on-write on a Binary Tree 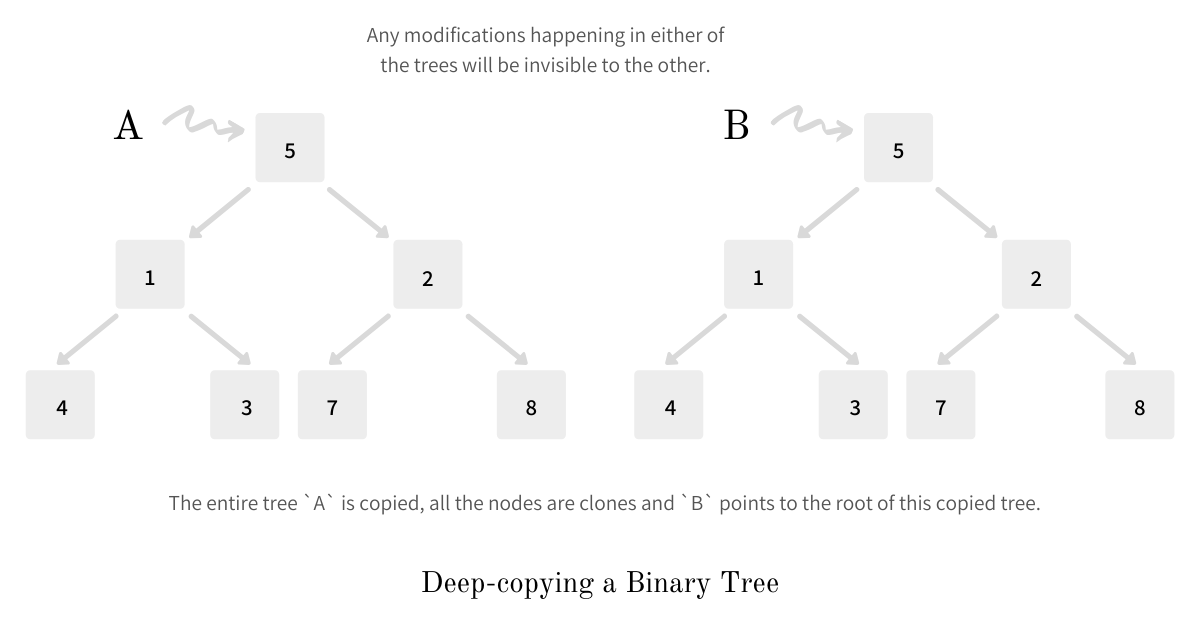 Copy-on-Write semantics suggest an optimistic approach where B instead of pointing to the cloned A, shares the same reference as A which means it also points to the exact same tree as A. Now say, we modify the node 2 in tree B and change its value to 9.

Observing closely we find that a lot of pointers could be reused and hence a better approach would be to only copy the path from the updating node till the root, keeping all other pointers references same, and let B point to this new root, as shown in the illustration. 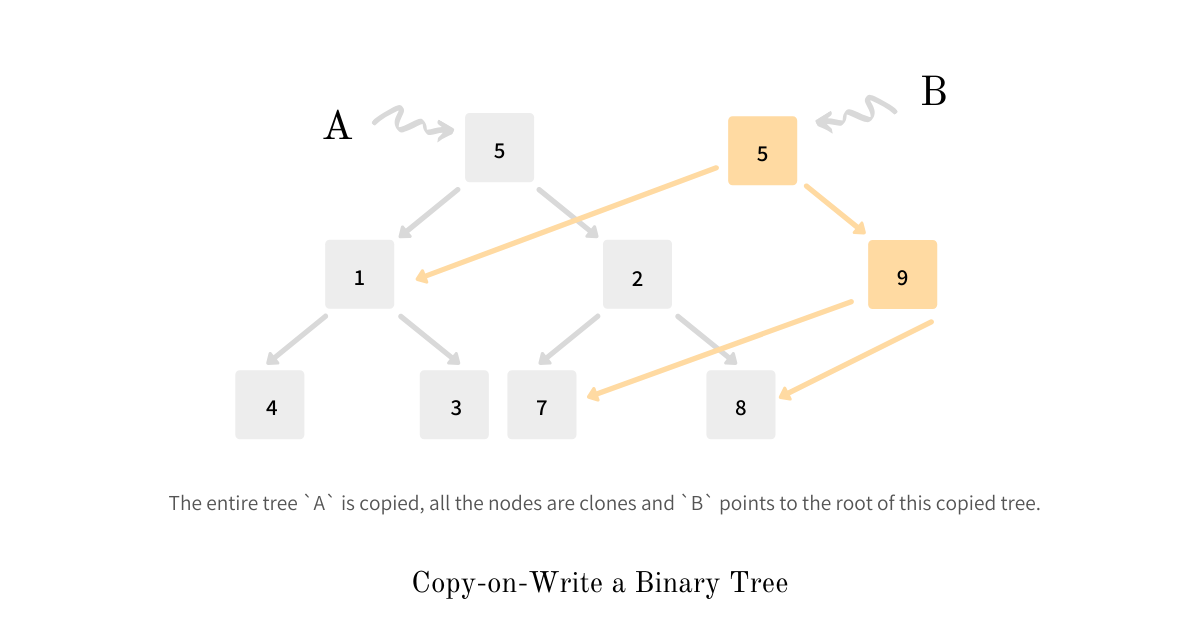 Thus instead of maintaining two separate mutually exclusive trees, we make space partially exclusive depending on which node is updated and in the process make things efficient with respect to memory and time. This behavior is core to a family of data structures called Persistent Data Structures.

Why shouldn't we Copy-on-Write

CoW is an expensive process if done aggressively. If on every single write, we create a copy then in a system that is write-heavy, things could go out of hand very soon. A lot of CPU cycles will be occupied for doing garbage collections and thus stalling the core processes. Picking which battles to win is important while choosing something as critical as Copy-on-Write.

The MySQL InnoDB Storage engine uses LRU cache but it suffers from a notorious problem. In this article, we find how by ...