Every multi-master replication setup comes with a side-effect - Conflicts. Conflict happens when two or more database accepts conflicting updates on the same record. We say that the updates are conflicting when we cannot resolve them to one value deterministically. In the previous essay, we took a detailed look into Conflict Detection, and in this one, we go in-depth to understand ways to handle conflicts (resolve and avoid).

In the case of a single-master setup, conflicts are avoided by funneling all the writes sequentially. When there are multiple updates on the same field, the last write operation on the record will determine the final value. We can leverage this insight into devising solutions that apply to multi-master setup.

Given that the writes can hit any Master in a multi-master setup, the challenge is to deterministically find the order of the operations to identify which operation came last. So, the approaches for conflict resolution will all revolve around determining or assigning the order to the operations, somehow. 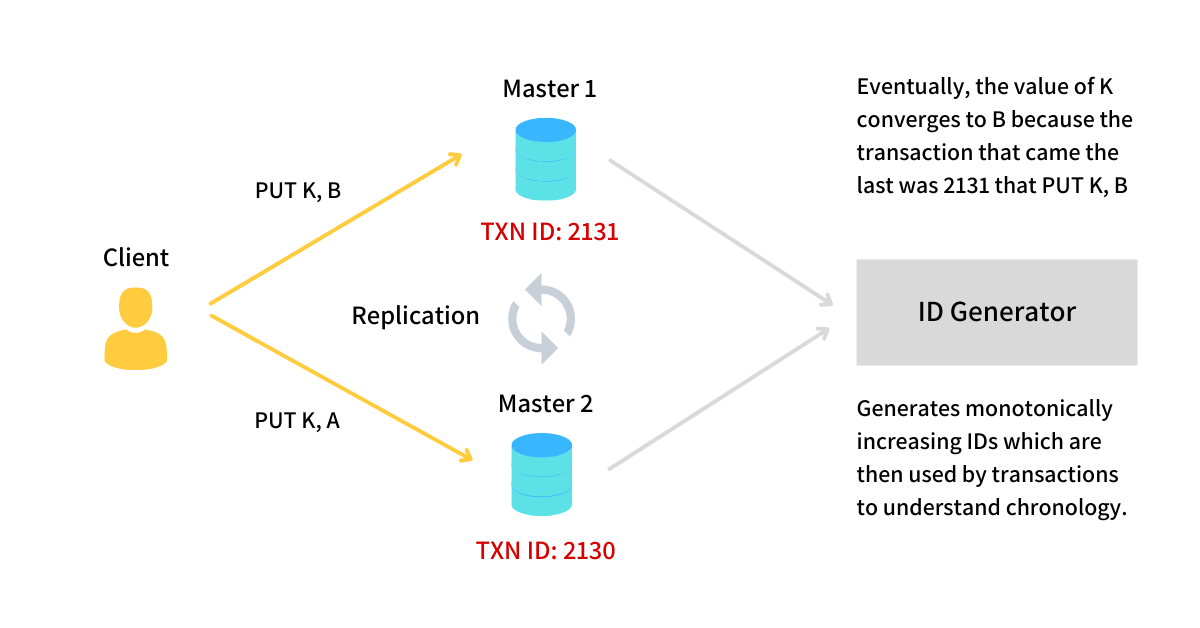 A globally unique, monotonically increasing ID generator has challenges and is an exhausting problem to solve for scale across distributed nodes. Still, it is essential to consider the idea behind the solution and understand the pattern.

This approach is similar to ordering write on a single master node but without affecting write throughput and concurrent updates. The monotonically increasing globally unique ID gives an implicit ordering to the writes to determine which one came last and hence mimics Last Write Wins.

Precedence of a database

Given that managing an ID generator at scale could be taxing, another possible solution is to assign the order to the master nodes. Upon conflict, the write from the Master having the highest number wins. 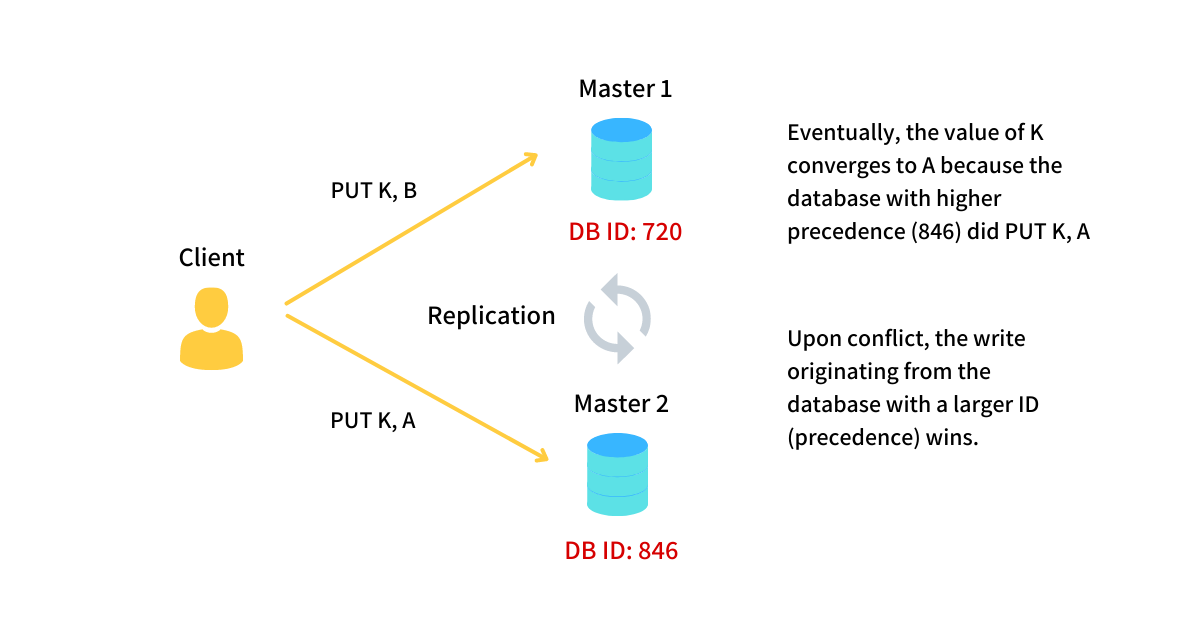 This approach is very lightweight, given that assigning orders to master nodes is simple and an infrequent activity. This approach will not guarantee the actual ordering of writes, so it is possible that the actual Last Write got overwritten by some write that happened on Master with the higher ID (precedence).

If, for a use case, it is not possible to resolve the conflicts at the database level, then the best approach in such a scenario is to record the conflict in a data structure designed to preserve all the information. Build a separate job that reads this data structure and resolves the conflict through a custom business logic.

When to resolve conflict?

There are two possible places where we can inject our conflict resolution logic (handler); the first one is upon writing, and the second one is upon reading.

This lazy approach can be seen in action in scenarios where we have to ensure that the writes are never rejected, no matter what.

Now that we have gone through these seemingly complex ways of conflict resolution, it seems better to try to avoid conflicts in the first place. This is indeed the simplest and widely adopted strategy for dealing with conflicts.

A possible way to avoid conflict is by adding stickiness in the system, allowing all writes of a particular record to go to a specific Master node, ensuring sequential operations, and simplifying the core requirement of Last Write Wins.

Asynchronous replication leads to a fascinating situation where it feels like we are going through a wormhole traveling ...

While designing a Distributed System, it is essential to pick the right kind of architecture. Usually, architectures are...

In this essay, we learn about a set of false assumptions that programmers new to distributed applications invariably mak...