A common strategy to make any system super-performant is Caching. Almost all software products, operating at scale, have multiple layers of caches in their architectures. Caching, when done right, does wonder to the response time and is one of the main reasons why products work so well at a massive scale. Cache engines are limited by the amount of memory available and hence once it gets full the engine has to decide which item should be evicted and that is where an eviction algorithm, like LFU and LRU. kicks in.

LRU (Least Recently Used) cache eviction strategy is one of the most popular strategies out there. LFU (Least Frequently Used) strategy fares well in some use cases but a concern with its most popular implementation, where it uses a min-heap, is that it provides a running time complexity of O(log n) for all the three operations - insert, update and delete; because of which, more often than not, it is replaced with a sub-optimal yet extremely fast O(1) LRU eviction scheme.

In this essay, we take a look at Constant Time LFU implementation based on the paper An O(1) algorithm for implementing the LFU cache eviction scheme by Prof. Ketan Shah, Anirban Mitra and Dhruv Matani, where instead of using a min-heap, it uses a combination of doubly-linked lists and hash table to gain a running time complexity of O(1) for all the three core operations. 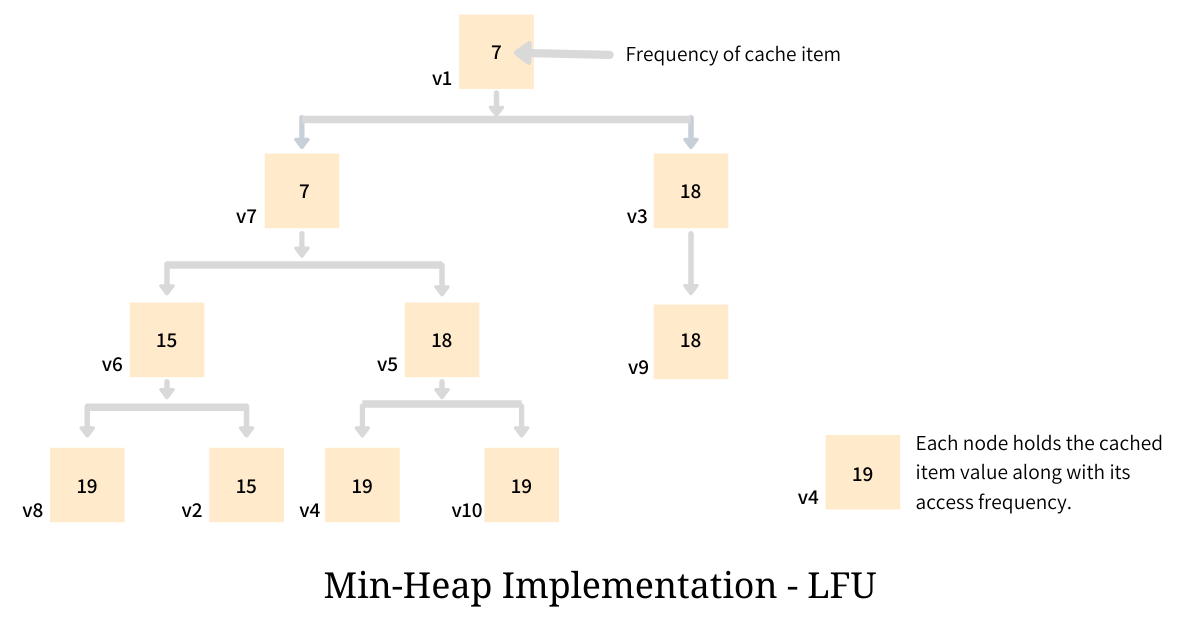 Although the identification of the element to be evicted is quick, but in order for the heap to maintain its property - element with lowest access frequency be at the top - it demands a rebalance, and this rebalancing process has a running complexity of O(log n). To make things worse, rebalancing is required every single time the frequency of an item is changed; which means that in the cache that implements LFU, every time an item is either inserted, accessed or evicted, a rebalance is required - making all the three core operations to have the time complexity of O(log n).

The LFU cache can be implemented with O(1) complexity for all the three operations by using one Hash Table and a bunch of Doubly Linked Lists. As stated by the RUM Conjecture, in order to get a constant time reads and updates operations, we have to make a compromise with memory utilization. This is exactly what we observe in this implementation.

The Hash Table stores the mapping of the cached key to the Value Node holding the cached value. The value against the key is usually a pointer to the actual Value Node. Given that the lookup complexity of the hash table is O(1), the operation to access the value given the key from this Hash Table could be accomplished in constant time. 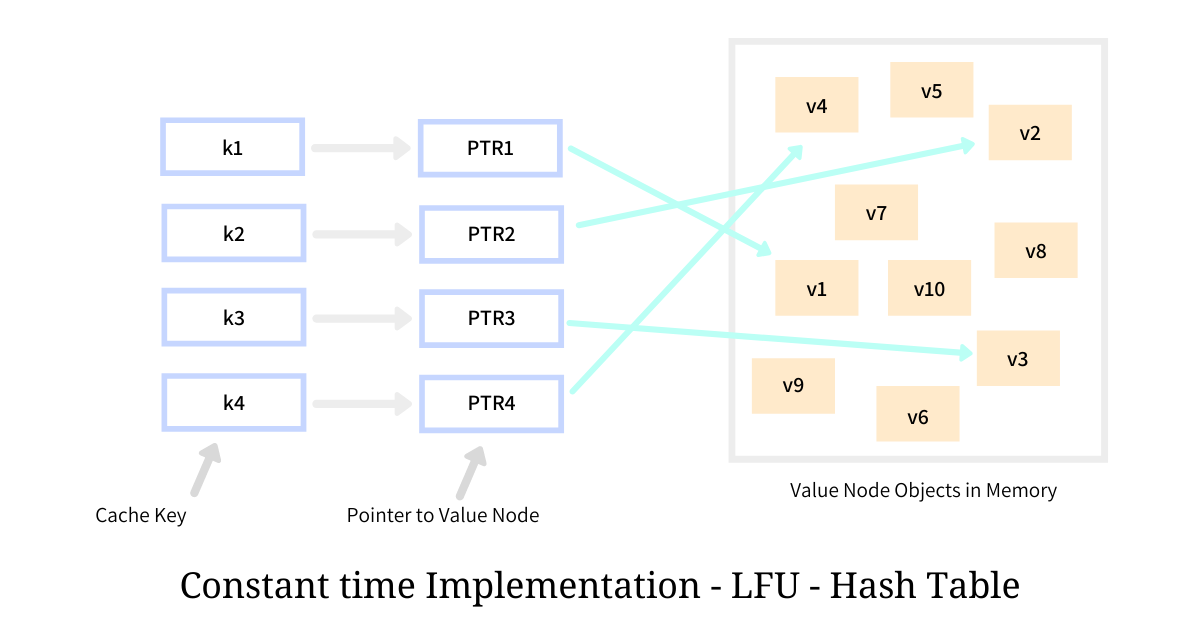 The illustration above depicts that the Hash Table holding cache keys k1, k2, etc are mapped to the nodes holding the values v1 and v2 through direct pointers. The nodes are allocated on the heap using dynamic allocation, hence are a little disorganized. The Value Node to which the key maps to, not only hold the cached value, but it also holds a few pointers pointing to different entities in the system, enabling constant-time operations.

Every Frequency Node holds the frequency that it represents in the member freq and the usual next and prev pointers pointing to the adjacent Frequency Nodes; it also keeps a values_ptr which points to another doubly-linked list holding Value Nodes (referred in the hash table) having the same access frequency freq. 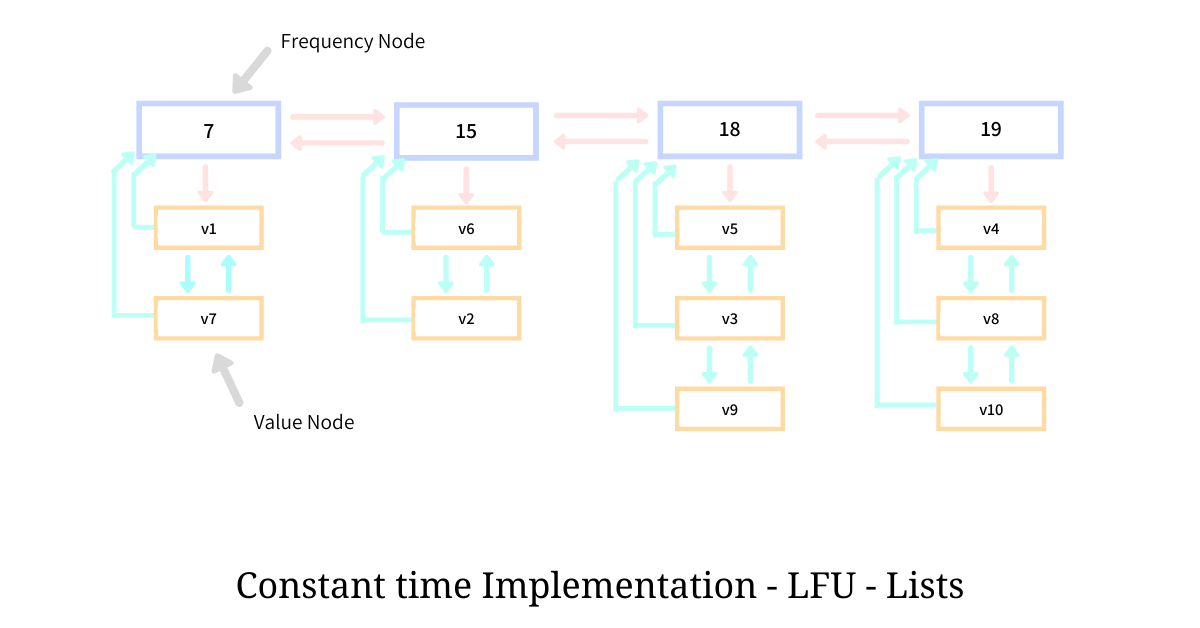 The Value Node contains the cached value in member data, along with the usual next and prev pointers pointing to the adjacent Value Nodes in the list. It also holds a freq_pointer pointing back to the Frequency Node to which the list if hooked at. Having all of these pointers helps us ensure all the three operations happen in constant time.

Now that we have put all the necessary structures in place, we take a look at the 3 core operations along with their pseudo implementation.

Adding value to the cache

Adding a new value to the cache is a relatively simpler operation that requires a bunch of pointer manipulations and does the job with a constant time running complexity. While inserting the value in the cache, we first check the existence of the key in the table, if the key is already present and we try to put it again the function raises an error. Then we ensure the presence of the Frequency Node representing the frequency of 1, and in the process, we might also need to create a new frequency node also. Then we wrap the value in a Value Node and adds it to the values_list of this Frequency Node; and at last, we make an entry in the table acknowledging the completion of the caching process.

As seen in the pseudocode above the entire procedure to add a new value in the cache is a bunch of memory allocation along with some pointer manipulations, hence we observe that the running complexity of O(1) for this operation.

Evicting an item from the cache

Eviction, similar to insertion, is a trivial operation where we simply pick the frequency node with lowest access frequency (the first node in the freq_list) and remove the first Value Node present in its values_list. Since the entire eviction also requires pointer manipulations, it also exhibits a running complexity of O(1).

Getting a value from the cache

Accessing an item from the cache has to be the most common operation of any cache. In the LFU scheme, before returning the cached value, the engine also has to update its access frequency. Ensuring the change in access frequency of one cached value does not require some sort of rebalancing or restructuring to maintain the integrity, is what makes this implementation special.

Consistent Hashing is one of the most sought after techniques when it comes to designing highly scalable distributed sys...