In this essay, we explore a simple yet effective DoS attack called Fork Bomb, also called Rabbit Virus. This attack forks out processes infinitely, starving them for any resources.

Online Coding Platforms and Code Evaluators are susceptible to this attack as they accept raw code from the user and execute it. So, if you are building one, do ensure you are protected against it and infinite loops. We will also discuss how to prevent and defend against Fork Bomb in the final section of this essay.

How do they work? 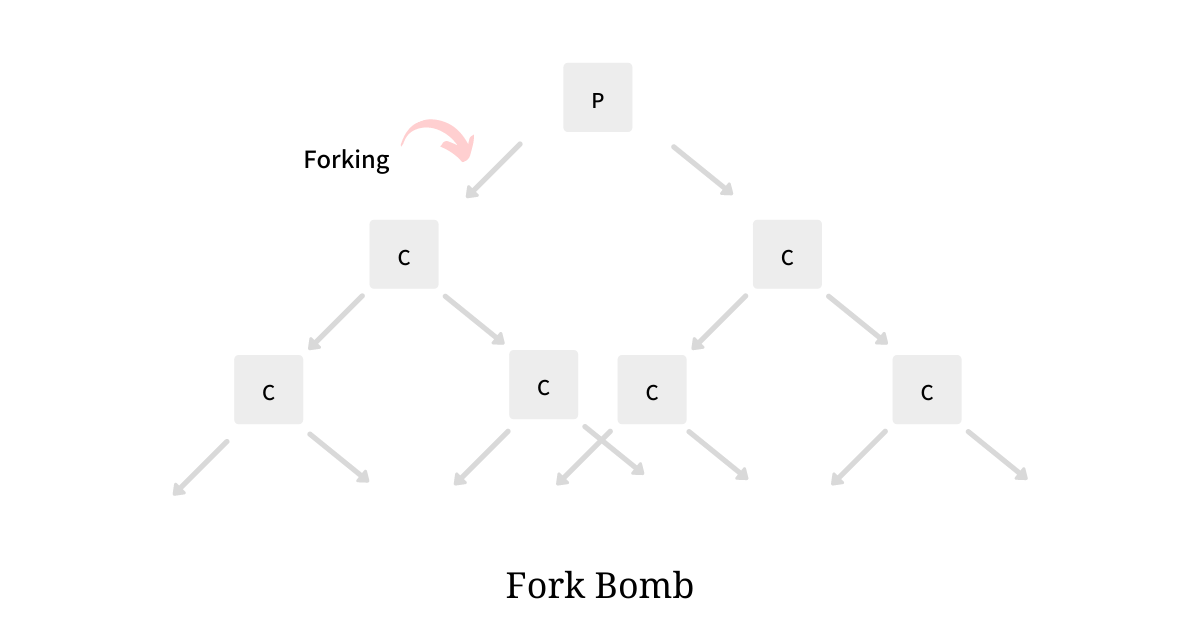 With so many processes competing for the CPU and other resources (if provisioned), the scheduler and CPU are put under tremendous load. After a specific limit, the entire system stalls.

Before we take a look at how to prevent or stop a Fork Bomb, let's look at something more interesting - how to implement a Fork Bomb?

A quick detour, let's see what fork does: Upon every invocation, the forked child process is an exact duplicate of the parent process except for a few details, but nonetheless what matters to us is that it runs the exact same code as the parent.

A simple C implementation of a Fork Bomb could be, to fork child processes within an infinite for loop, resulting in exponential forking of child processes.

These child processes start consuming the resources and blocking the legitimate programs. This prevents the creation of any new processes. This also freezes the process that responds to Keystrokes, putting the entire system to a standstill.

There is a very famous Fork Bomb implementation in Bash, and the code that does this has no alphabets or numbers in it, just pure symbols.

Although the shell statement looks gibberish, it is effortless to understand. In the statement above, we are defining a function named : having body :|:& and at the end invoking it using the name :, just like any usual shell function.

How to prevent them?

To protect our system against Fork Bombs, we can cap the processes owned by a certain user, thus blocking process creation at that cap.

Using the *nix utility called ulimit, we can set the maximum number of processes that a user can execute in the system, using the flag -u. By setting this value to an appropriate (lower) value, we can cap the process creation for a user, ensuring we can never be fork bombed by that user.

C language does not support inheritance however it does support Structure Compositions which can be tweaked to serve use...

Python must be doing something beautiful internally to support super long integers and today we find out what's under th...

Why MongoDB's cursor.skip() is Slow?

MongoDB's cursor.skip() is very inefficient, why is that? Even though it is slow and inefficient, team MongoDB wants to...