Measuring the number of distinct elements from a stream of values is one of the most common utilities that finds its application in the field of Database Query Optimizations, Network Topology, Internet Routing, Big Data Analytics, and Data Mining.

A deterministic count-distinct algorithm either demands a large auxiliary space or takes some extra time for its computation. But what if, instead of finding the cardinality deterministically and accurately we just approximate, can we do better? This was addressed in one of the first algorithms in approximating count-distinct introduced in the seminal paper titled Probabilistic Counting Algorithms for Data Base Applications by Philippe Flajolet and G. Nigel Martin in 1984.

In this essay, we dive deep into this algorithm and find how wittily it approximates the count-distinct by making a single pass on the stream of elements and using a fraction of auxiliary space.

The problem statement of determining count-distinct is very simple -

Given a stream of elements, output the total number of distinct elements as efficiently as possible.

Deterministically computing count-distinct is an easy affair, we need a data structure to hold all the unique elements as we iterate the stream. Data structures like Set and Hash Table suit this use-case particularly well. A simple pythonic implementation of this approach is as programmed below

Above deterministic approach demands an auxiliary space of O(n) so as to accurately measure the cardinality. But when we are allowed to approximate the count we can do it with a fraction of auxiliary space using the Flajolet-Martin Algorithm.

The Flajolet-Martin algorithm uses the position of the rightmost set and unset bit to approximate the count-distinct in a given stream. The two seemingly unrelated concepts are intertwined using probability. It uses extra storage of order O(log m) where m is the number of unique elements in the stream and provides a practical estimate of the cardinalities. 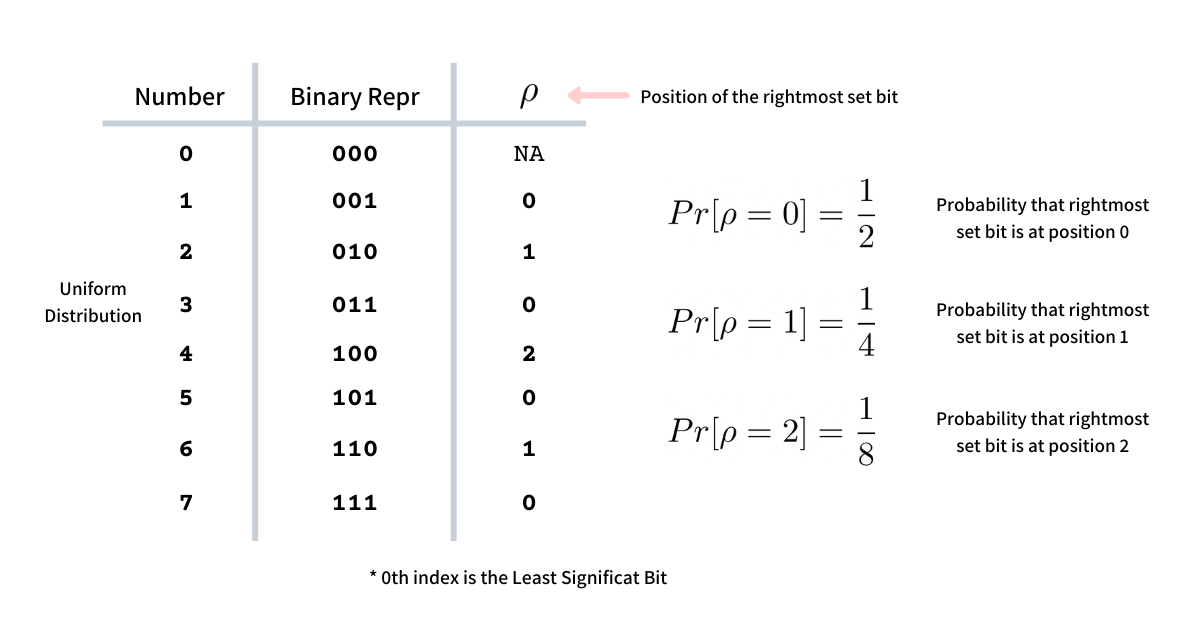 In general, we can say, the probability of the rightmost set bit, in binary presentation, to be at the position k in a uniform distribution of numbers is

So if we keep on recording the position of the rightmost set bit, ρ, for every element in the stream (assuming uniform distribution) we should expect ρ = 0 to be 0.5, ρ = 1 to be 0.25, and so on. This probability should become 0 when bit position, b is b > log m while it should be non-zero when b <= log m where m is the number of distinct elements in the stream.

Hence, if we find the rightmost unset bit position b such that the probability is 0, we can say that the number of unique elements will approximately be 2 ^ b. This forms the core intuition behind the Flajolet Martin algorithm.

The above intuition and approximation are based on the assumption that the distribution of the elements in the stream is uniform, which cannot always be true. The elements can be sparse and dense in patches. To ensure uniformity we hash the elements using a multiplicative hash function

where a and b are odd numbers and c is the capping limit of the hash range. This hash function hashes the elements uniformly into a hash range of size c.

The procedure of the Flajolet-Martin algorithm is as elegant as its intuition. We start with defining a closed hash range, big enough to hold the maximum number of unique values possible - something as big as 2 ^ 64. Every element of the stream is passed through a hash function that permutes the elements in a uniform distribution.

The algorithm was run on a stream size of 1048 with a varying number of distinct elements and we get the following plot. 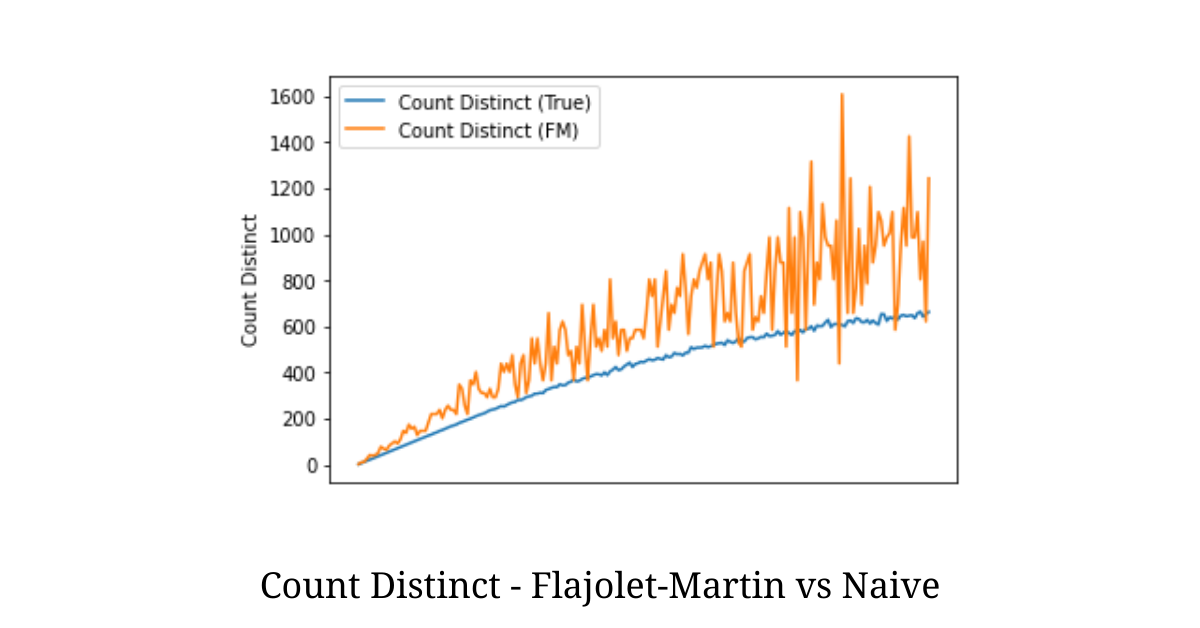 From the illustration above we see that the approximated count-distinct using the Flajolet-Martin algorithm is very close to the actual deterministic value.

A great feature of this algorithm is that the result of this approximation will be the same whether the elements appear a million times or just a few times, as we only consider the rightmost set bit across all elements and do not sample.

The algorithm was run on the text dump of The Jungle Book by Rudyard Kipling. The text was converted into a stream of tokens and it was found that the total number of unique tokens was 7150. The approximation of the same using the Flajolet-Martin algorithm came out to be 7606 which in fact is pretty close to the actual number.

Anomaly detection is an age-old problem and in this article, we dive deep into an unsupervised algor...