In the previous essay, we went through the Single-byte XOR cipher and found a way to decipher it without having any knowledge of the encryption key. In this essay, we find how to break a Repeating-key XOR cipher with variable key length. The problem statement, defined above, is based on Cryptopals Set 1 Challenge 6.

The Repeating-key XOR cipher algorithm works with an encryption key with no constraint on its length, which makes it much stronger than a Single-byte XOR Cipher, where the encryption key length was restricted to a single byte.

A plain text is encrypted using an encryption key by performing a bitwise XOR operation on every character. The encryption key is repeated until it XORs every single character of the plain text and the resultant stream of bytes is again translated back as characters and sent to the other party. These encrypted bytes need not be among the usual printable characters and should ideally be interpreted as a stream of bytes. Following is the python-based implementation of this encryption process. 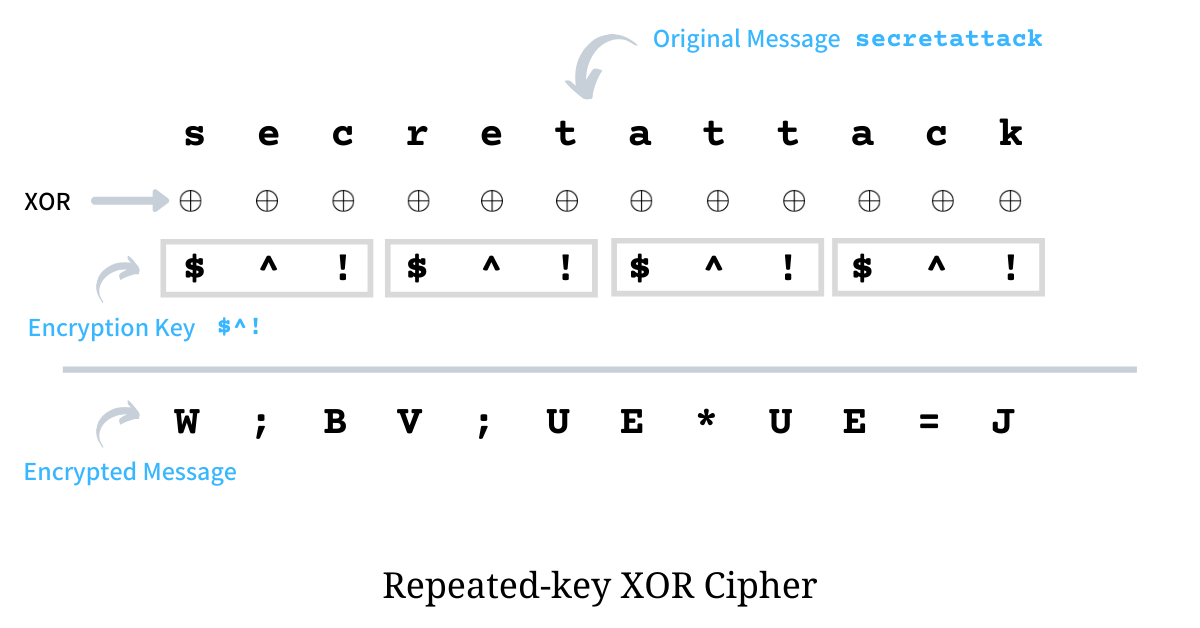 For the first character in plain text - s - the byte i.e. ASCII value is 115 which when XORed with $ results in 87 whose character equivalent is W, similarly for the second character e the encrypted byte is ;, for c it is B, for the fourth character r, since the key repeats, the XOR is taken with $ to get V and the process continues. The resultant encrypted text using repeated-key XOR on the plain text secretattack with key $^! is W;BV;UE*UE=J.

Since encryption and decryption both have an exact same implementation - we pass the ciphertext to the function repeating_key_xor, defined above, to get the original message back.

Things become really interesting when, given the encryption algorithm, we have to recover the original message from the ciphertext with no knowledge of the encryption key. Just like solving any other problem, the crux of deciphering the message encrypted using repeated-key XOR cipher is to break it down into manageable sub-problems and tackle them independently. We break this deciphering problem into the following two sub-problems:

Finding the length of the Encryption Key

Hamming distance between two bytes is the number of positions at which the corresponding bits differ. For a stream of bytes, of equal lengths, it is the sum of Hamming Distances between the corresponding bytes. Finding differences between bits can be efficiently done using bitwise XOR operation as the operation yields 0 when both the bits are the same and 1 when they differ. So for computing Hamming Distance between two bytes we XOR the bytes and count the number of 1 in its binary representation.

Hamming distance is an absolute measure, hence in order to compare hamming distance across byte streams of varying lengths, it has to be normalized with the number of pairs of bits compared. We name this measure - Hamming Score - which thus is defined as the Hamming Distance per unit bit-pair. In python, Hamming Score is implemented as:

What can we infer through Hamming Distance?

This inference comes in handy when we want to find out the length of Encryption Key in Repeating-key XOR Cipher as illustrated in the section below.

The above definitions, along with the rules of XOR operations, implying that if we XOR two bytes of the ciphertext, encrypted (XORed) using the same byte of the encryption key, we are effectively XORing the corresponding bytes of the plain text. If k' is the byte of the encryption key k which was used to encrypt (XOR) the bytes p[i] and p[j] of the plain text to generate c[i] and c[j] of the ciphertext, we could derive the following relation

The above relation, c[i] XOR c[j] equal to p[i] XOR p[j], holds true only because both the bytes were XORed with the same byte k' of the encryption key; which in fact helped reduce the expression. If the byte from the encryption key which was used to XOR the pain texts were different then the relation was irreducible and we could not have possibly setup this relation.

Chunking is the process where the ciphertext is split into smaller chunks (segments) of almost equal lengths. For example, chunking the ciphertext W;BV;UE*UE=J for chunk length 4 would create 3 chunks W;BV, ;UE* and UE=J. The illustration below shows the chunks that would be formed for W;BV;UE*UE=J with chunks lengths varying from 2 to 6. 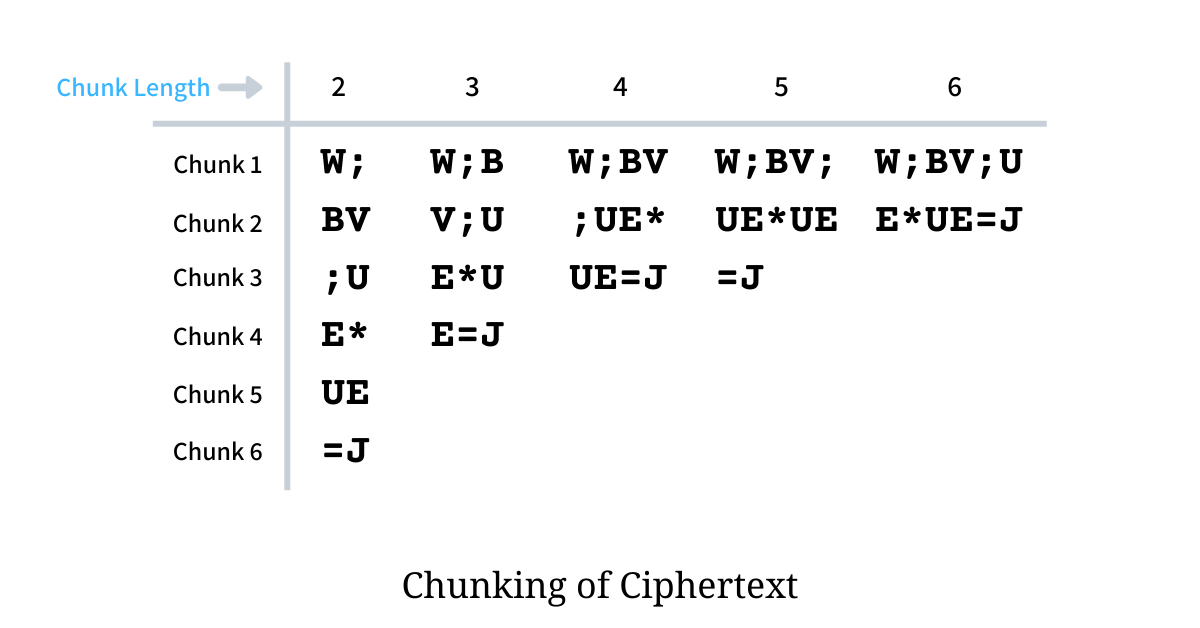 XOR of the chunks 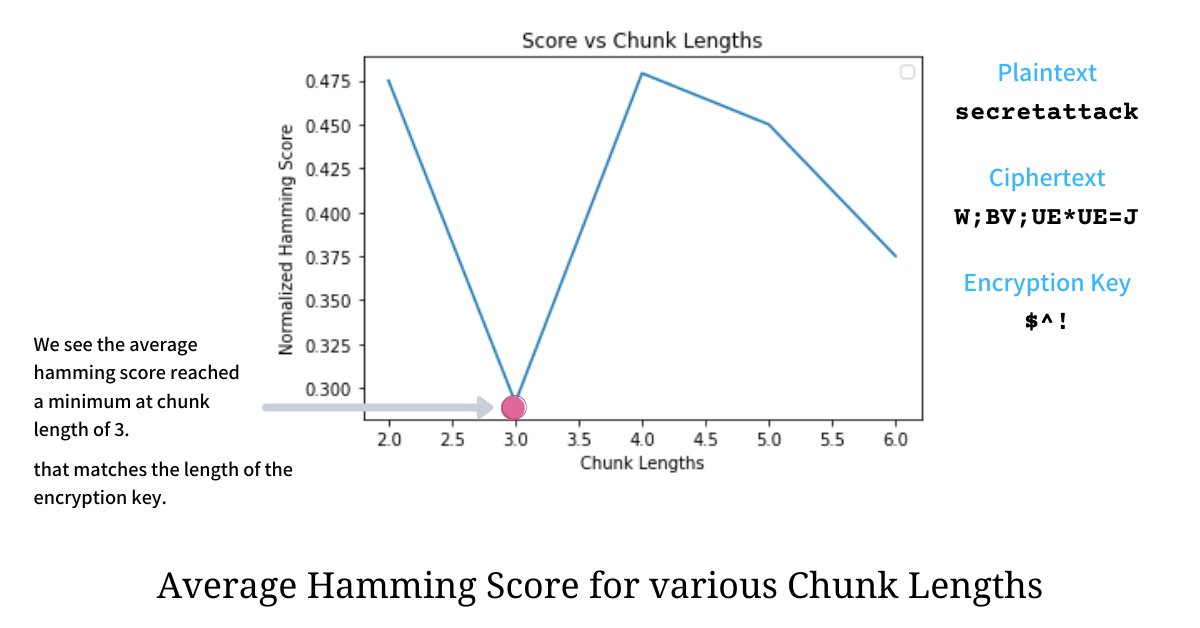 From the distribution above it is evident that the score was minimum at chunk length equalling 3, which actually was the length of the Encryption Key used on the plain text. Is this mere coincidence or are we onto something?

When chunk length is equal to the length of the encryption key, the XOR operation on any two chunks will reduce the expression to XOR of the corresponding plain texts (as seen above), because there will be a perfect alignment of bytes from ciphertext and bytes from the keys i.e every ith byte from both the chunks would have been XORed with ith byte from the encryption key.

We have established that for chunk length equal to the length of the encryption key c[i] XOR c[j] is effectively p[i] XOR p[j]. Since we have assumed that the plain text is a lowercased English sentence the XOR is happening between bytes residing numerically closer to each other and hence has a lower Average Hamming Score between them; because of which we see a minimum at this particular chunk length. The Hamming Score will be much higher for lengths other than the length of Encryption Key because during XOR operation the expression stays irreducible and hence hamming distance is computed panning the entire range of bytes [0, 256). 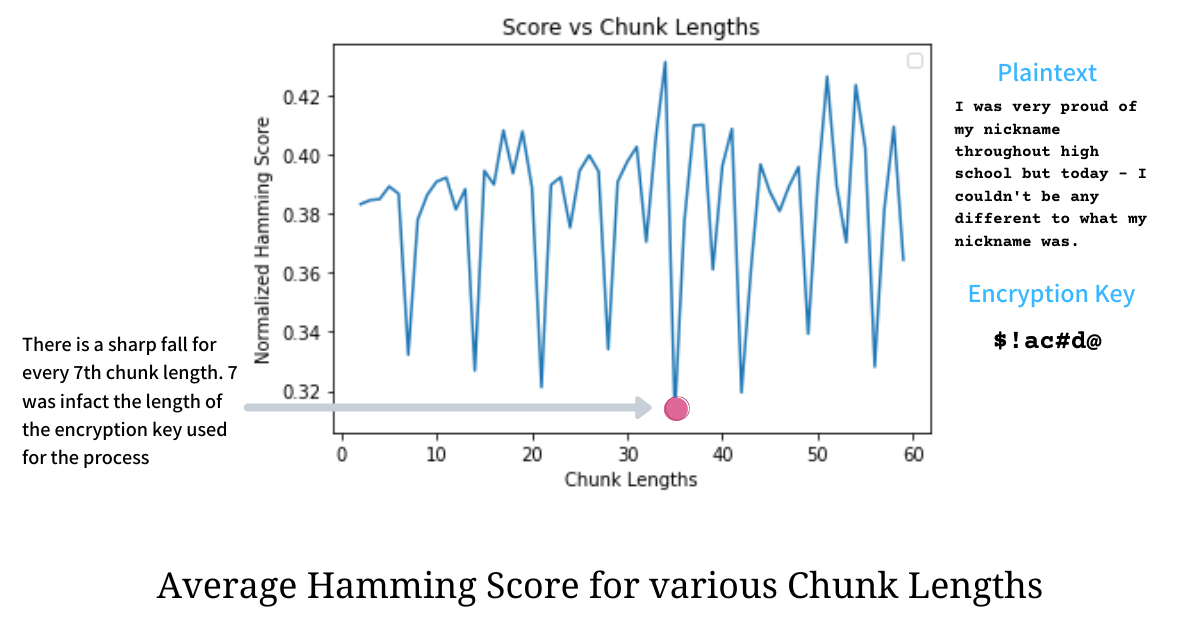 The above distribution shows a lot of sharp drops of Average Hamming Score for chunk lengths that are multiples of 7 - the length of the encryption key used.

Bruteforce to recover the original text

The function compute_key_length returns the length of the Encryption Key used to encrypt the plain text. Once we know the length, we can apply Bruteforce with all possible keys of that length and try to decipher the ciphertext. The approach of deciphering will be very similar to how it was done to Decipher single-byte XOR Ciphertext i.e. by using Letter Frequency Distribution and Fitting Quotient to find which key leads to the plain text that is closest to a genuine English sentence.

A test was run on 100 random English sentences with random Encryption keys of varying lengths and it was found that this deciphering technique worked with an accuracy of 99%. Even though the approach is not fool-proof, it does pretty well in eliminating keys that would definitely not result in a correct plain text.

Deciphering a repeated-key XOR Cipher could also be done using Kasiski examination; the method we saw in this essay was Friedman Test using Hamming Distance and Frequency Analysis. The main purpose of this essay was to showcase how seemingly unrelated concepts work together to solve an interesting problem efficiently.

Deciphering is the process of recovering the original message from an encrypted byte stream, usually, without having any...