Every programming language aims to be performant in its niche and achieving superior performance requires a lot of compiler level optimizations. One famous optimization technique is Constant Folding where during compile time the engine tries to recognize constant expressions, evaluate them, and replaces the expression with this newly evaluated value, making the runtime leaner.

In this essay, we dive deep and find what exactly is Constant Folding, understand the scope of it in the world of Python and finally go through Python's source code - CPython - and find out how elegantly Python actually implements it.

In Constant Folding, the engine finds and evaluates constant expressions at compile time rather than computing them at runtime, making the runtime leaner and faster.

In Python, we could use the Disassembler module to get the CPython bytecode giving us a good peek at how things will be executed. When we disassemble the above constant expression using the dis module, we get the following bytecode

We see that the bytecode, instead of having two binary multiply operations followed by one LOAD_CONST, is having just one LOAD_CONST with the already evaluated value of 86400. This indicates that the CPython interpreter during parsing and building of Abstract Syntax Tree folded the constant expression, 24 * 60 * 60 and replaced it with the evaluated value 86400.

Python tries to fold every single constant expression present but there are some cases where even though the expression is constant, but Python chooses not to fold it. For example, Python does not fold x = 4 ** 64 while it does fold x = 2 ** 64.

Apart from the arithmetic expressions, Python also folds expressions involving Strings and Tuples, where constant string expressions till the length 4096 are folded.

Now we shift our focus to the internals and find exactly where and how CPython implements Constant Folding. All AST optimizations, including Constant Folding, can be found in file ast_opt.c. The base function starting it all is astfold_expr which folds any and every expression that Python source has. The function recursively goes through the AST and tries to fold every constant expression, as seen in the snippet below. 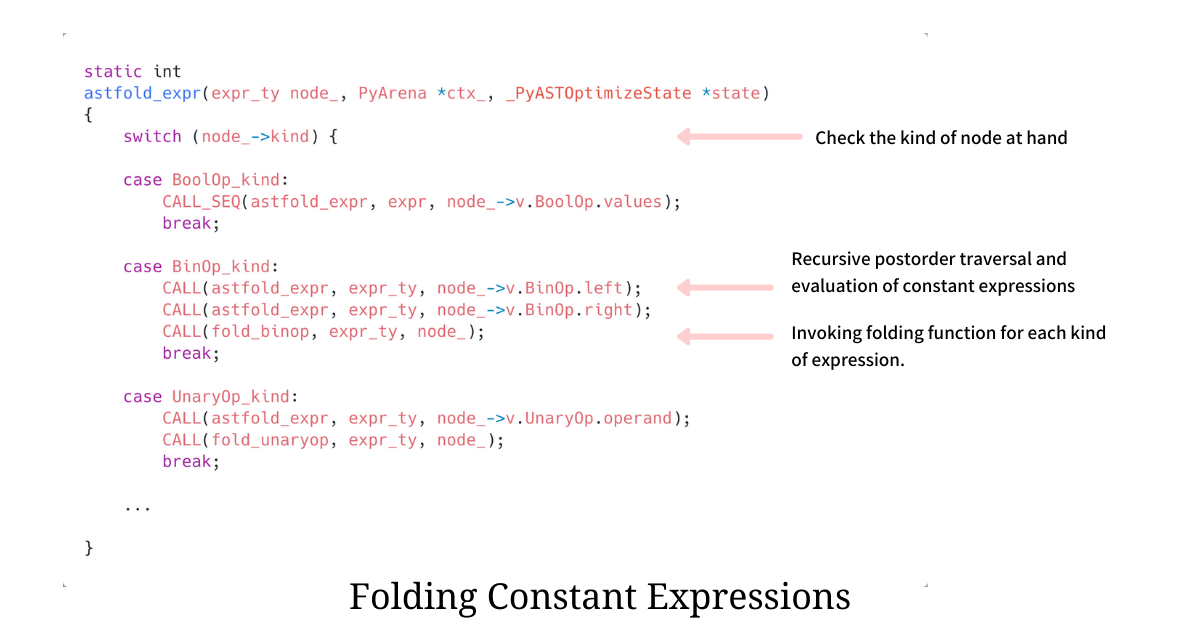 For example, whenever astfold_expr encounters a binary operation, it recursively folds the two child operands (expressions) before evaluating the expression at hand using fold_binop. The function fold_binop returns the evaluated constant value as seen in the snippet below. 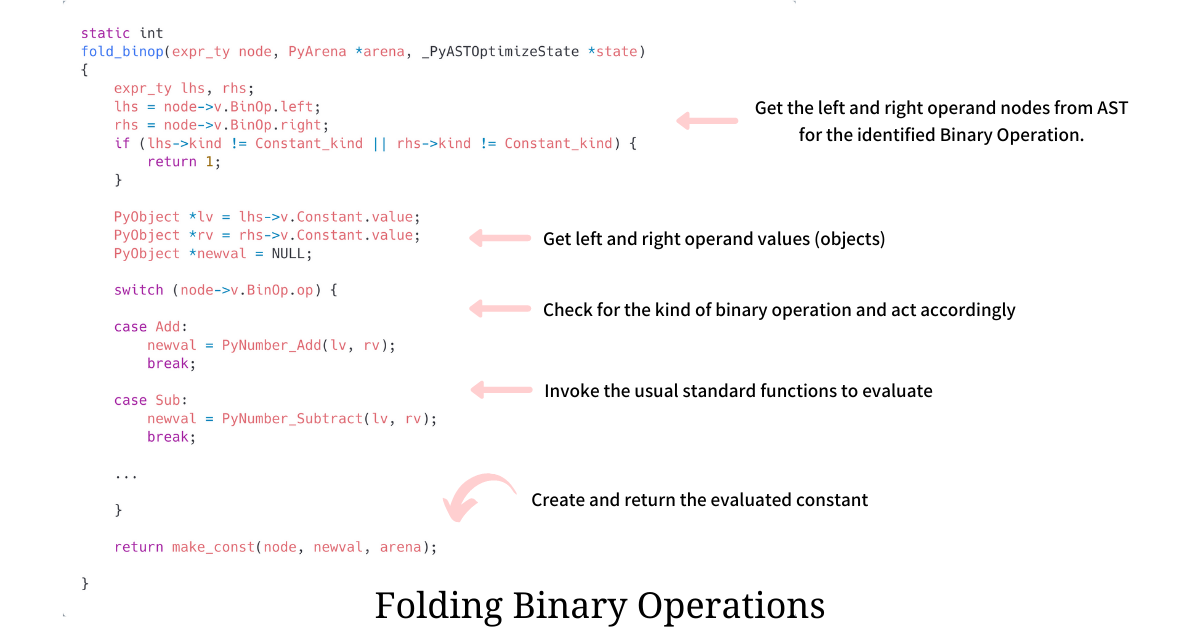 fold_binop function folds the binary operation by checking the kind of operator at hand and then invoking the corresponding evaluation function on them. For example, if the operation at hand is an addition then, to evaluate the final value, it invokes PyNumber_Add on both its left and right operands.

What makes this elegant?

Instead of writing special logic to handle certain patterns or types to fold constant expressions efficiently, CPython invokes the same general code. For example, it invokes the same usual PyNumber_Add function while folding that it does to perform the usual addition operation.

CPython has thus eradicated the need to write special functions to handle constant folding by making sure its code and evaluation process is structured in such a way that the general-purpose code itself can handle the evaluation of constant expressions.

Personalization is what we all love. In this article we find how we could personalize the Python int...

In Python, Integers are not iterables but we can make them iterable by implementing __iter__ functio...

The most intuitive way of building and implementing Finite State Machines is by using Python Corouti...