Consistent hashing is a hashing technique that performs really well when operated in a dynamic environment where the distributed system scales up and scales down frequently. The core concept of Consistent Hashing was introduced in the paper Consistent Hashing and RandomTrees: Distributed Caching Protocols for Relieving Hot Spots on the World Wide Web but it gained popularity after the famous paper introducing DynamoDB - Dynamo: Amazon’s Highly Available Key-value Store. Since then the consistent hashing gained traction and found a ton of use cases in designing and scaling distributed systems efficiently. The two famous examples that exhaustively use this technique are Bit Torrent, for their peer-to-peer networks and Akamai, for their web caches. In this article we dive deep into the need of Consistent Hashing, the internals of it, and more importantly along the way implement it using arrays and Binary Search.

Before we jump into the core Consistent Hashing technique we first get a few things cleared up, one of which is Hash Functions. Hash Functions are any functions that map value from an arbitrarily sized domain to another fixed-sized domain, usually called the Hash Space. For example, mapping URLs to 32-bit integers or web pages' HTML content to a 256-byte string. The values generated as an output of these hash functions are typically used as keys to enable efficient lookups of the original entity.

An example of a simple hash function is a function that maps a 32-bit integer into an 8-bit integer hash space. The function could be implemented using the arithmetic operator modulo and we can achieve this by taking a modulo 256 which yields numbers in the range [0, 255] taking up 8-bits for its representation. A hash function, that maps keys to such integer domain, more often than not applies the modulo N so as to restrict the values, or the hash space, to a range [0, N-1].

A good hash function has the following properties - The function is computationally efficient and the values generated are easy for lookups - The function, for most general use cases, behaves like a pseudorandom generator that spreads data out evenly without any noticeable correlation

Now that we have seen what a hash function is, we take a look into how we could use them and build a somewhat scalable distributed system.

Say we are building a distributed storage system in which users can upload files and access them on demand. The service exposes the following APIs to the users

Behind the scenes the system has Storage Nodes on which the files are stored and accessed. These nodes expose the functions put_file and fetch_file that puts and gets the file content to/from the disk and sends the response to the main API server which in turn sends it back to the user.

To sustain the initial load, the system has 5 Stogare Nodes which stores the uploaded files in a distributed manner. Having multiple nodes ensures that the system, as a whole, is not overwhelmed, and the storage is distributed almost evenly across.

The hash function used over here simply sums the bytes and takes the modulo by 5 (since there are 5 storage nodes in the system) and thus generating the output in the hash space [0, 4]. This output value now represents the index of the storage engine that will be responsible for holding the file.

Things become interesting when the system gains some traction and it needs to be scaled to 7 nodes, which means now the hash function should do mod 7 instead of a mod 5. Changing the hash function implies changing the mapping and association of files with storage nodes. We first need to administer the new associations and see which files required to be moved from one node to another. 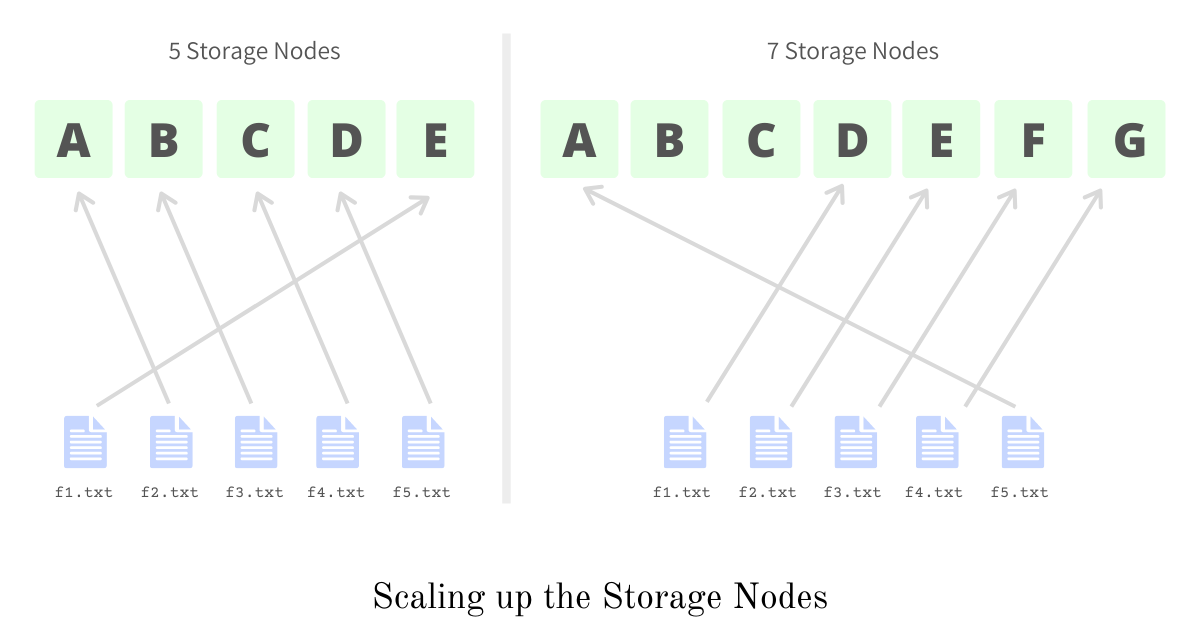 If we have to change the hash function every time we scale up or down and if this requires us to move not all but even half of the data, the process becomes super expensive and in longer run infeasible. So we need a way to minimize the data movement required during scale-ups or scale-downs, and this is where Consistent Hashing fits in and minimizes the required data transfer.

The major pain point of the above system is that it is prone to events like scale-ups and scale-downs as it requires a lot of alterations in associations. These associations are purely driven by the underlying Hash Function and hence if we could somehow make this hash function independent of the number of the storage nodes in the system, we address this flaw.

Consistent Hashing addresses this situation by keeping the Hash Space huge and constant, somewhere in the order of [0, 2^128 - 1] and the storage node and objects both map to one of the slots in this huge Hash Space. Unlike in the traditional system where the file was associated with storage node at index where it got hashed to, in this system the chances of a collision between a file and a storage node are infinitesimally small and hence we need a different way to define this association.

Instead of using a collision-based approach we define the association as - the file will be associated with the storage node which is present to the immediate right of its hashed location. Defining association in this way helps us 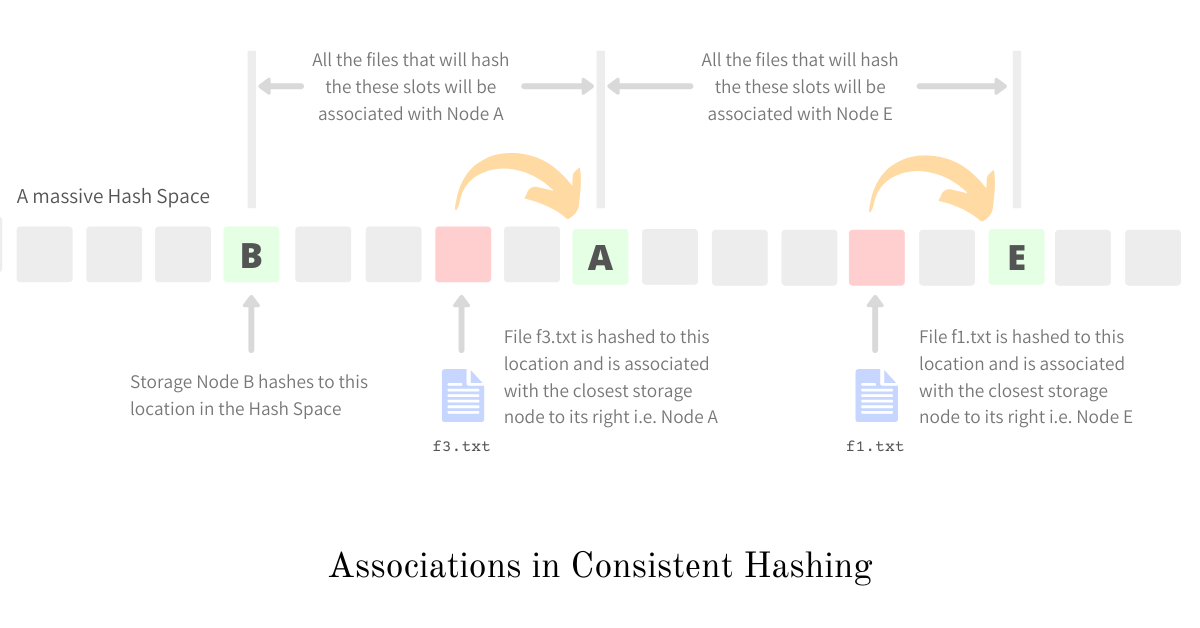 Consistent Hashing on an average requires only k/n units of data to be migrated during scale up and down; where k is the total number of keys and n is the number of nodes in the system.

A very naive way to implement this is by allocating an array of size equal to the Hash Space and putting files and storage node literally in the array on the hashed location. In order to get association we iterate from the item's hashed location towards the right and find the first Storage Node. If we reach the end of the array and do not find any Storage Node we circle back to index 0 and continue the search. The approach is very easy to implement but suffers from the following limitations

We define total_slots as the size of this entire hash space, typically of the order 2^256 and the hash function could be implemented by taking SHA-256 followed by a mod total_slots. Since the total_slots is huge and a constant the following hash function implementation is independent of the actual number of Storage Nodes present in the system and hence remains unaffected by events like scale-ups and scale-downs.

Adding a new node in the system

When there is a need to scale up and add a new node in the system, in our case a new Storage Node, we

When a new node is added in the system it only affects the files that hash at the location to the left and associated with the node to the right, of the position the new node will fit in. All other files and associations remain unaffected, thus minimizing the amount of data to be migrated and mapping required to be changed. 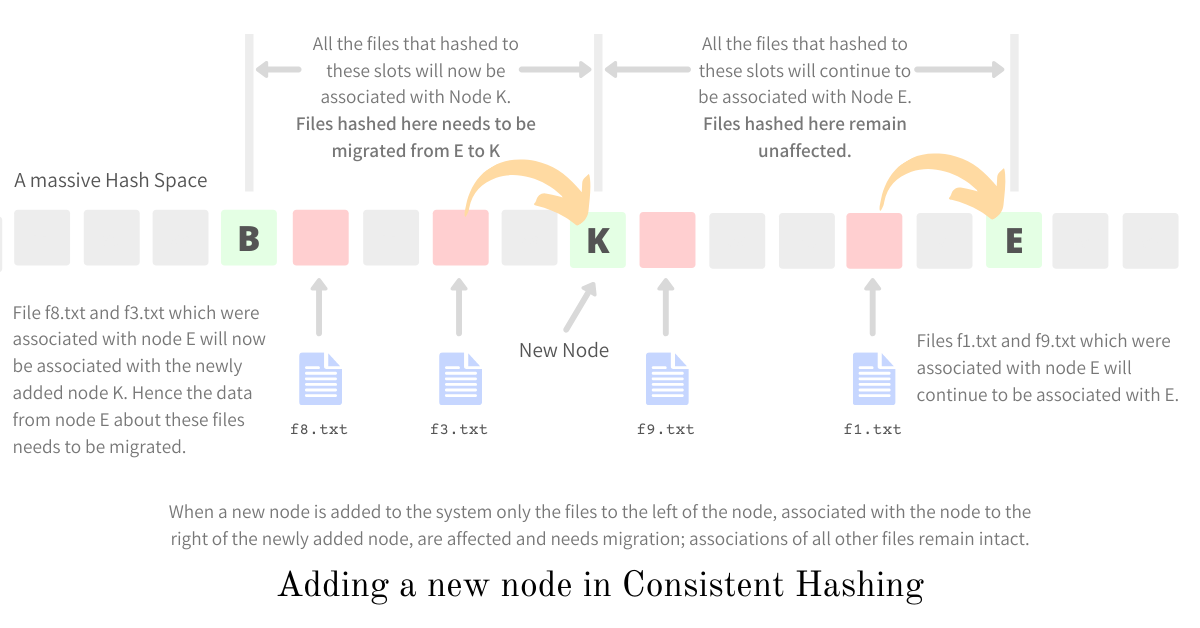 In order to implement this at a low-level using nodes and keys array, we first get the position of the new node in the Hash Space using the hash function. We then find the index of the smallest key greater than the position in the sorted keys array using binary search. This index will be where the key and the new Storage node will be placed in keys and nodes array respectively.

Removing a new node from the system

When there is a need to scale down and remove an existing node from the system, we

When a node is removed from the system it only affects the files associated with the node itself. All other files and associations remain unaffected, thus minimizing the amount of data to be migrated and mapping required to be changed. 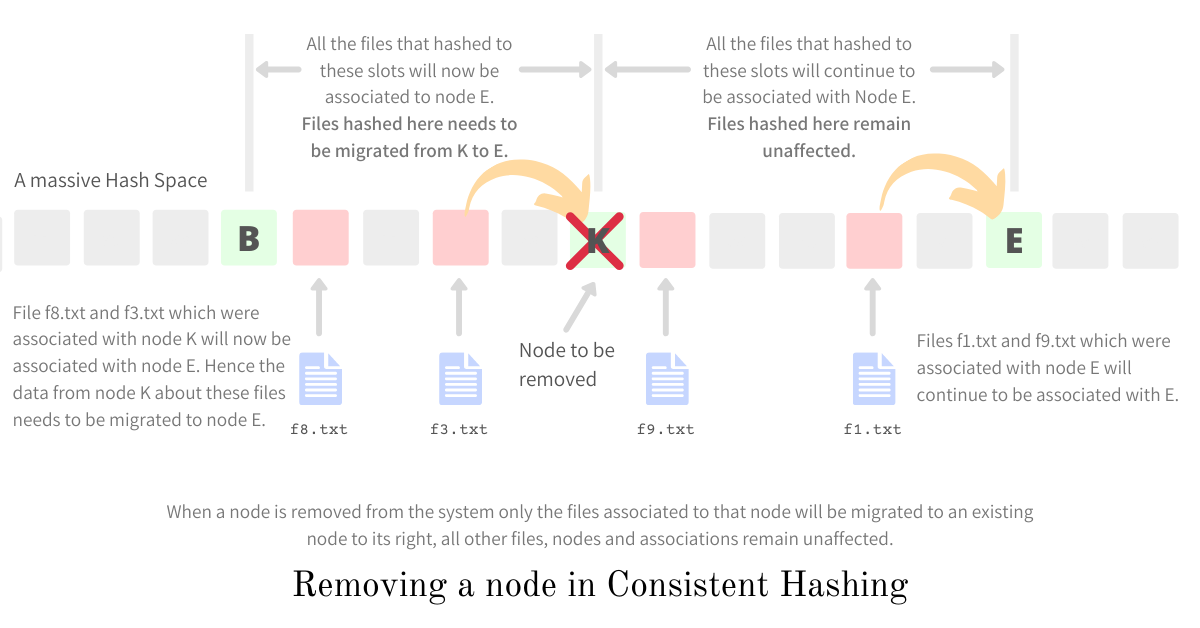 In order to implement this at a low-level using nodes and keys array, we get the index where the node K lies in the keys array using binary search. Once we have the index we remove the key from the keys array and Storage Node from the nodes array present on that index.

Associating an item to a node

Now that we have seen how consistent hashing helps in keeping data migration, during scale-ups and scale-downs, to a bare minimum; it is time we see how to efficiently we can find the "node to the right" for a given item. The operation to find the association has to be super fast and efficient as it is something that will be invoked for every single read and write that happens on the system.

To implement this at low-level we again take leverage of binary search and perform this operation in O(log(n)). We first pass the item to the hash function and fetch the position where the item is hashed in the hash space. This position is then binary searched in the keys array to obtain the index of the first key which is greater than the position (obtained from the hash function). if there are no keys greater than the position, in the keys array, we circle back and return the 0th index. The index thus obtained will be the index of the storage node in the nodes array associated with the item.

The source code with the implementation of Consistent Hashing in Python could be found at github.com/arpitbbhayani/consistent-hashing.

Consistent Hashing is one of the most important algorithms to help us horizontally scale and manage any distributed system. The algorithm does not only work in sharded systems but also finds its application in load balancing, data partitioning, managing server-based sticky sessions, routing algorithms, and many more. A lot of databases owe their scale, performance, and ability to handle the humongous load to Consistent Hashing.

The most popular implementation of the LFU Cache Eviction Scheme, using a min-heap, implements all three operations with...