When you code in a low-level language like C, you worry about picking the right data type and qualifiers for your integers; at every step, you need to think if int would suffice or should you go for a long or even higher to a long double. But while coding in python, you need not worry about these "trivial" things because python supports integers of arbitrary size.

In C, when you try to compute 220000 using builtin powl function it gives you inf as the output.

But for python, it is a piece of cake 🎂

Python must be doing something beautiful internally to support integers of arbitrary sizes and today we find out what's under the hood!

An integer in Python is a C struct defined as following

This indicates that an integer, just like a tuple or a list, is variable in length and this is our first insight into how it could support gigantically long integers. The _longobject after macro expansion could be roughly seen as

These are some meta fields in the PyObject struct, used for reference counting (garbage collection), but that we would require a separate article. The field that we will focus on is ob_digit and to some extent ob_size.

ob_digit is an array of type digit, typedef'ed from uint32_t, statically allocated to length 1. Since it is an array, ob_digit primarily is a digit *, pointer to digit, and hence if required could be malloced to any length. This makes it possible for python to represent and handle gigantically long integers.

Generally, In low-level languages like C, the precision of integers is limited to 64-bit, but Python implements Arbitrary-precision integers. Since Python 3 all integers are represented as a bignum and these are limited only by the available memory of the host system.

ob_size holds the count of elements in ob_digit. To be more efficient while allocating the memory to array ob_digit, python over-provisions and then relies on the value of ob_size to determine the actual number of elements held int the array.

A naive way to store an integer digit-wise is by actually storing a decimal digit in one item of the array and then operations like addition and subtraction could be performed just like grade school mathematics.

With this approach, a number 5238 will be stored as 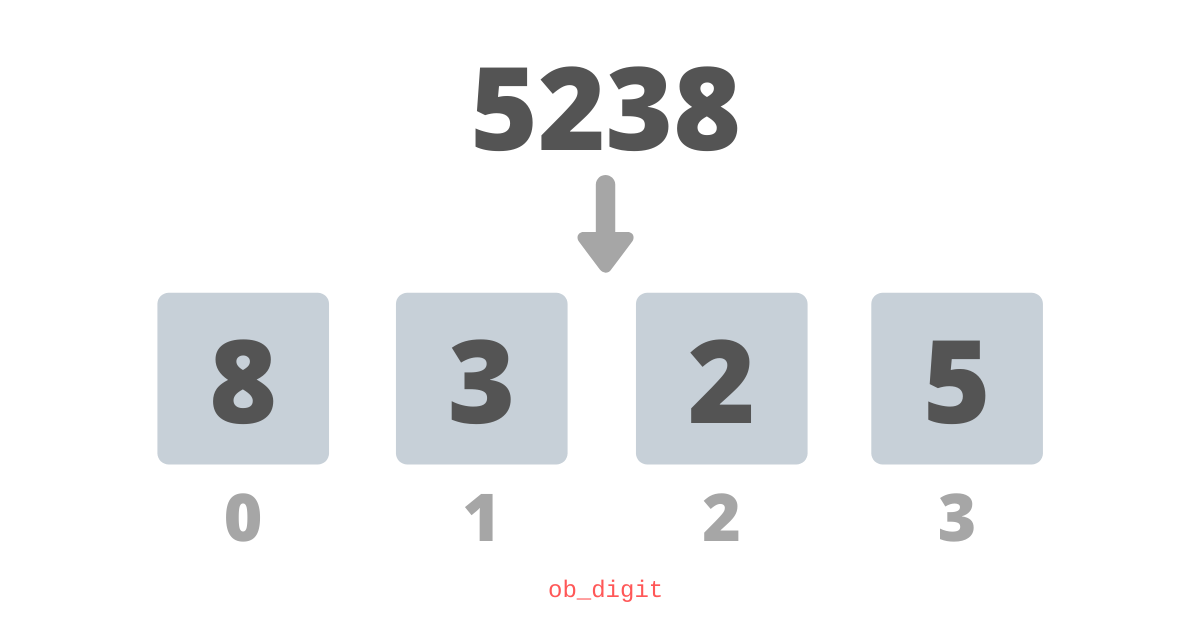 This approach is inefficient as we will be using up 32 bits of digit (uint32_t) to store a decimal digit that actually ranges only from 0 to 9 and could have been easily represented by mere 4 bits, and while writing something as versatile as python, a core developer has to be more resourceful than this.

So, can we do better? for sure, otherwise, this article should hold no place on the internet. Let's dive into how python stores a super long integer.

Instead of storing just one decimal digit in each item of the array ob_digit, python converts the number from base 10 to base 230 and calls each of element as digit which ranges from 0 to 230 - 1.

This way python efficiently uses almost all of the allocated space of 32 bits per digit and keeps itself resourceful and still performs operations such as addition and subtraction like grade school mathematics.

Since ob_digit persists it least significant digit first, it gets stored as 001 in 3 different digits.

The _longobject struct for this value will hold 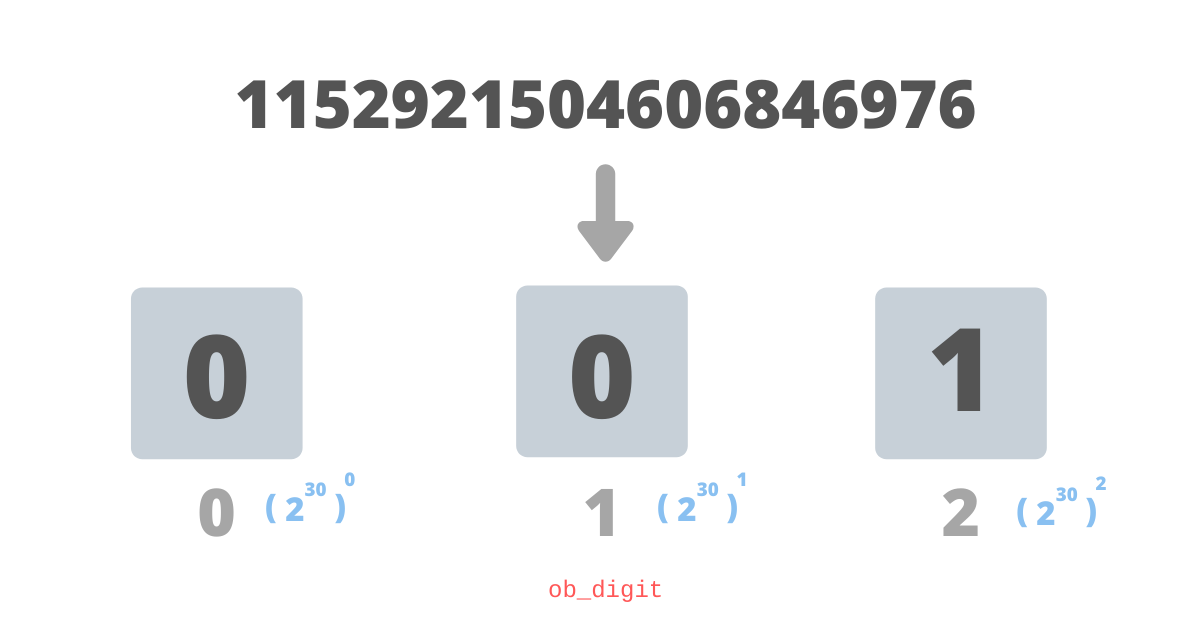 I have created a demo REPL that will output the way python is storing integers internally and also has reference to struct members like ob_size, ob_refcount, etc.

Now that we have a fair idea on how python supports and implements arbitrary precision integers its time to understand how various mathematical operations happen on them.

Integers are persisted "digit-wise", this means the addition is as simple as what we learned in the grade school and python's source code shows us that this is exactly how it is implemented as well. The function named x_add in file longobject.c performs the addition of two numbers.

The code snippet above is taken from x_add function and you could see that it iterates over the digits and performs addition digit-wise and computes and propagates carry.

The code snippet above is taken from x_sub function and you could see how it iterates over the digits and performs subtraction and computes and propagates burrow. Very similar to addition indeed.

Again a naive way to implement multiplication will be what we learned in grade school math but it won't be very efficient. Python, in order to keep things efficient implements the Karatsuba algorithm that multiplies two n-digit numbers in O( nlog23) elementary steps.

The algorithm is slightly complicated is out of the scope of this article but you can find its implementation in k_mul and k_lopsided_mul functions in file longobject.c.

Division and other operations

All operations on integers are defined in the file longobject.c and it is very simple to locate and trace each one. Warning: it will take some time to understand each one in detail so grab some popcorn before you start skimming.

This optimization can be traced in the macro IS_SMALL_INT and the function get_small_int in longobject.c. This way python saves a lot of space and computation for commonly used integers.

This essay is heavily inspired, and to some extent copied, from Artem Golubin's post - Python internals: Arbitrary-precision integer implementation. In case you want a detailed deep dive on CPython Integers or CPython Internals in general, I recommend you checkout the CPython Internal Series by Artem Golubin.

Thank you Artem Golubin for all the amazing CPython Internal articles.

I changed the Python's source code and made addition incorrect and unpredictable. The addition operation will internally...