One programming paradigm, that is hardest to visualize, as almost every single programmer out there will agree on, is Recursion. We usually use pen and paper to visualize the flow and check how recursion is behaving. But what if, this could be done programmatically, and today we address this very problem and try to come up with a simple yet effective solution.

This essay is going to be a little different from the usuals; instead of taking a look into a research paper or an algorithm, we will implement a simple and easy recursion visualizer for Python.

Recursion helps in solving a larger problem by breaking it into smaller similar ones. The classic implementation of recursion in the world of programming is when a function invokes itself using reduced parameters while having a base terminating condition.

The most effective way of visualizing recursion is by drawing a recursion tree. It is very useful for visualizing what happens when a recurrence is iterated. The recursion tree for the above function fib for input n = 3 is as illustrated below 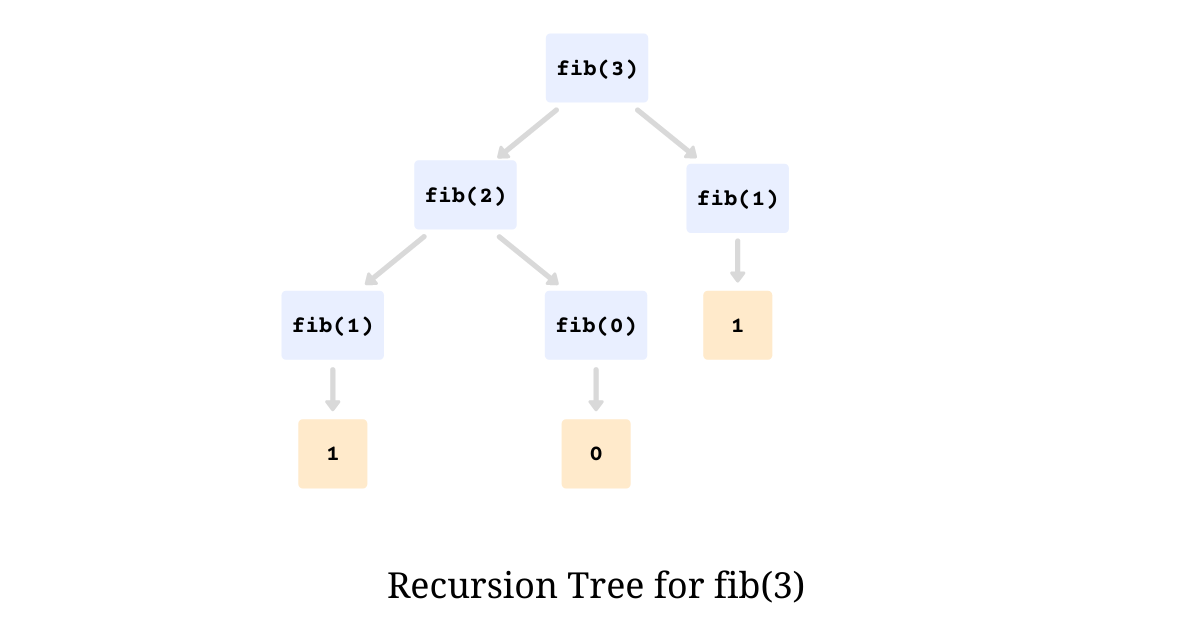 Instead of printing an actual tree-like recursion tree, we take some liberty and print a close-enough version of it running top-down. To keep track of recursive function calls we use Python Decorators that essentially wraps the function allowing us to invoke statements before and after the function call.

The decorator that wraps the recursive function and prints the recursion tree is as illustrated below.

We use recursion_level to keep track of the current recursion level using which we decide the indentation. The value of this variable is increased every time we are about the invoke the function while it is reduced post the execution. In order to pretty-print the invoked function, we have a helper method called pretty_func whose implementation can be found here.

When we decorate our previously defined fib function and invoke it with n = 3 we get the following output.

The above output renders how recurrence is evaluated and is pretty printed to make it more human-readable. The right arrow -> defines a function invocation while the left arrow <- indicates the return value post invocation.

Publishing it on PyPI

Everything mentioned above is published in a Python Package and hosted on PyPI at pypi/recviz. So in order to use this, simply install the package recviz like a usual Python package using pip and decorate the recursive function.

The most intuitive way of building and implementing Finite State Machines is by using Python Coroutines and in this arti...

TF-IDF is extensively used in search engines and in various document classification and clustering techniques. Instead o...