A few essays back, we saw how pseudorandom numbers are generated using Cellular Automaton - Rule 30. This essay takes a detailed look into random number generation using LFSR - Linear Feedback Shift Registers. LFSR is widely adopted to generate random numbers on microcontrollers because they are very simple, efficient, and easy to adopt both hardware and software.

A pseudorandom number generator produces numbers that seem aperiodic (random) but are deterministic. It uses a seed value and generates a sequence of random numbers as a function of the current state and some previous states.

These are pseudorandom (not truly random) because the following numbers can be determined algorithmically if the seed value is known. True random numbers are either generated using hardware or from natural phenomena like blood volume pulse, atmospheric pressure, thermal noise, quantum phenomenon, etc. 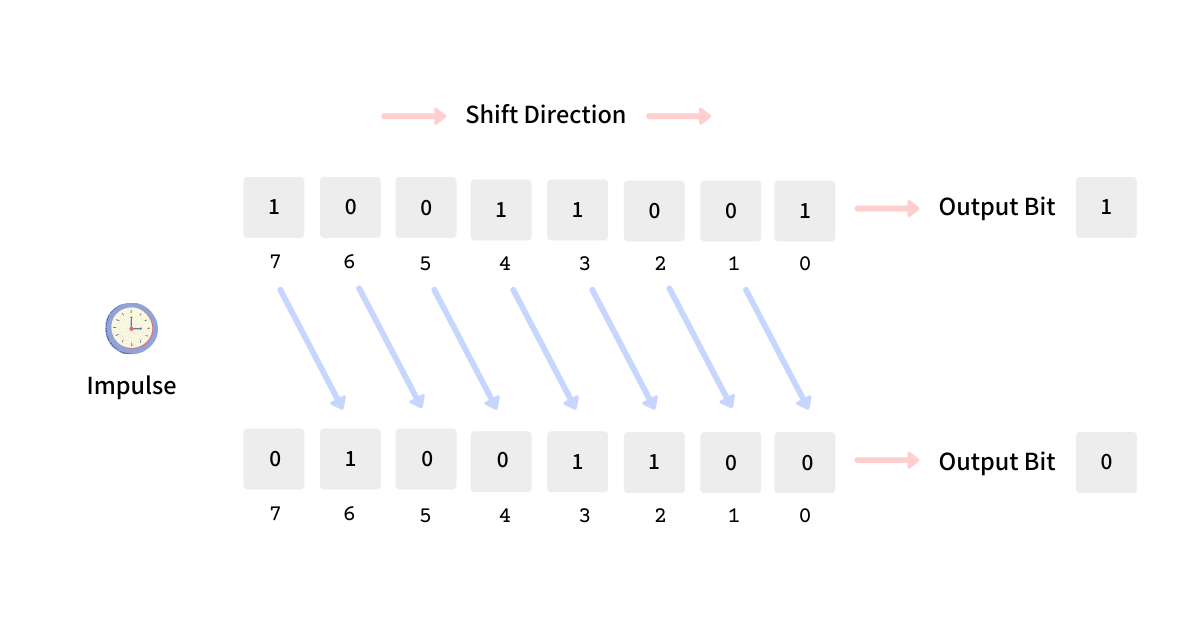 The LFSR is initiated with a random value called a seed. The next state of the register can be computed deterministically using its previous state and the mentioned operations.

A series of latches (bits) connected to the next in line forming a chain is called a register. The diagram below shows an 8-bit shift register that shifts to the right upon an impulse. The rightmost bit that is thrown out during the shift is the output bit. 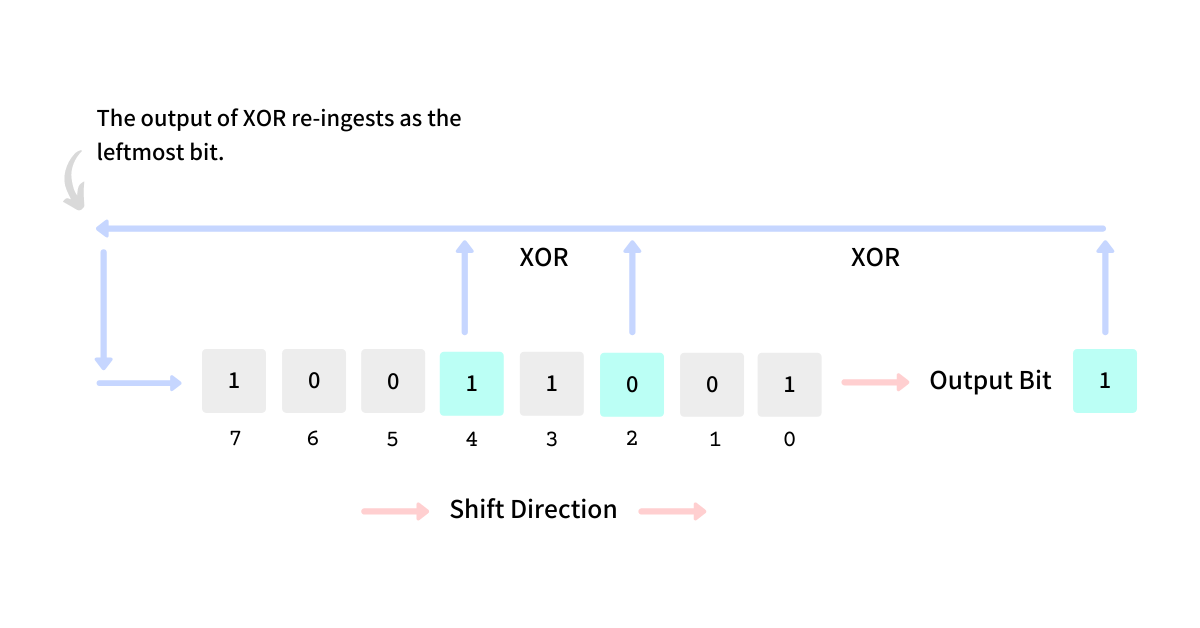 When the shift happens, the leftmost latch gets vacant, and it is either

LFSR that we used to generate pseudorandom numbers goes with the third approach and applies a boolean XOR on a set of chosen latches, called taps, and puts the resultant bit in the leftmost latch, creating a Linear Feedback.

An LFSR has 3 configurable parameters

We build a simple 4-bit LFSR with a seed value of 0b1001 and tap position of 1. The output bit will be the rightmost bit of the register, and the next state of the LFSR will be computed as the 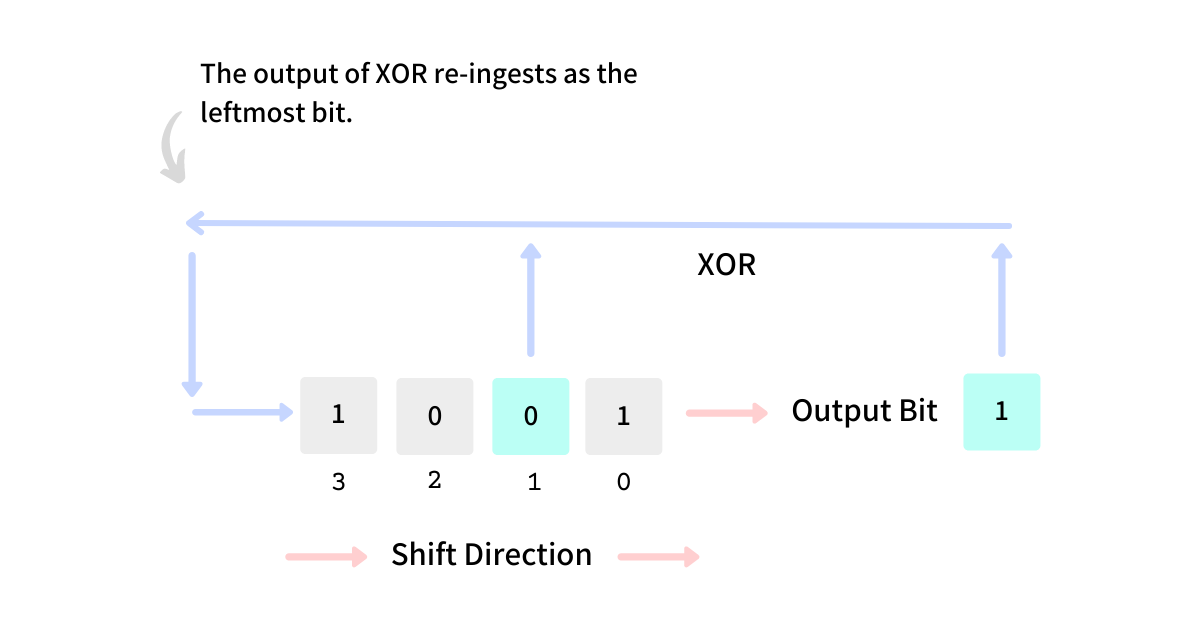 After all the above operations are completed, the set of bits in the LFSR becomes the current state and is then used to output the next random bit, thus continuing the cycle.

The above example is taken from the Computerphile's video on this same topic.

Golang-based implementation of the above LFSR is as shown below. We define a struct holding LFSR with the mentioned three parameters - the number of bits in the register, the seed, and the position of the taps. We define the function named NextBit on it that returns a pseudorandom bit generated with the logic mentioned above.

When we execute the above code with seed 0b1001, tap position 1, on a 4-bit LFSR, we get the following random bits as the output, and with a little bit of pretty-printing, we see

The output bits seem random enough, but upon a close inspection, we see that the last 5 output bits are the same as the first 5, and it is because, for the given configuration of seed and tap, the value in the LFSR becomes the same as the seed value 0b1001 after 15 iterations; thus, from the 16th position, we can see the same set of output bits generated.

By carefully selecting the seed and the taps, we can ensure that the cycle is long enough to never repeat in our process’s lifetime. You can find the detailed source code for this LFSR at github.com/arpitbbhayani/lfsr.

Although LFSR generates pseudorandom bits, generating random numbers is fairly simple using it. To generate a k-bit random number we need to generate k random bits using our routine LFSR and accumulate them in a k-bit integer, which becomes our random number.

Golang-based implementation of the above logic can be seen in the function named NextNumber defined below.

We can see that the numbers are fairly random and are within the limits of an 8-bit integer. You can find the detailed source code for this LFSR at github.com/arpitbbhayani/lfsr.

LFSRs find their application across a wide spectrum of use cases, given how efficient they generate randomness. Their applications include digital counters, generating pseudorandom numbers, pseudo-noise, scramble radio frequencies, and in general, a stream of bytes. We take a detailed look into LFSR for scrambling.

The idea of scrambling using LFSR goes like this. We read the raw bytes from the file and pass them to the scrambler function. The function initializes the LFSR with the necessary register length, seed, and tap positions and is kept ready to generate the 8-bit random numbers.

The unscrambling process exploits the following property of XOR and the fact that the LFSR will generate the same set of random numbers in the same order for the given configuration.

So, if we XOR a byte twice with the same number, we get the same byte in return. We apply the same scramble function even to unscramble the scrambled data.

Although LFSRs are very efficient both on the software and hardware sides, there are some concerns about using them.

The number of bits in the LFSR is limited (as configured); the register will repeat the same set after generating a certain set of bits. The length of the cycle depends solely on the seed value and the tap configuration. So, while employing LFSR for random number generation, it is essential to pick a good set of tap positions and seeds to ensure a very long cycle.

Suppose we get hold of a few consecutive random numbers generated from the LFSR. In that case, we can put them in a few linear equations and reach the initial configuration, enabling us to predict the future set of random numbers. Given how vulnerable LFSRs can be, they are not used at places that need cryptographic strength.

If you have written something cool in Python and want to make it installable via pip and easy_install, this post will he...