While I was writing a piece of code to solve a problem, I wrote an innocent looking for loop which I had to break when a particular condition was met. Hence wrote the most obvious looking code ever - it used break once condition was met and this way the flow broke out of the loop. Once my solution was accepted by an online judge I thought could I have done anything else here?

This triggered me to benchmark different ways to get out of an iterating loop. The two of the most common ways to stop iterating a loop are

Everything is better with an example. Let's say we need to find if character a is present in the array and we need to set the value of bool variable a_found accordingly.

Should there be considerable difference in performance? My efforts to write an article about this gives you the obvious answer. YES! there is a significant difference.

The code to benchmark iterates over a string to see if a is present or not. The length of the string is variable and goes from 500 to 1000000000. We measure the time taken for each approach - standard benchmark practice. You can find the code here - code to benchmark stopping the loop iteration 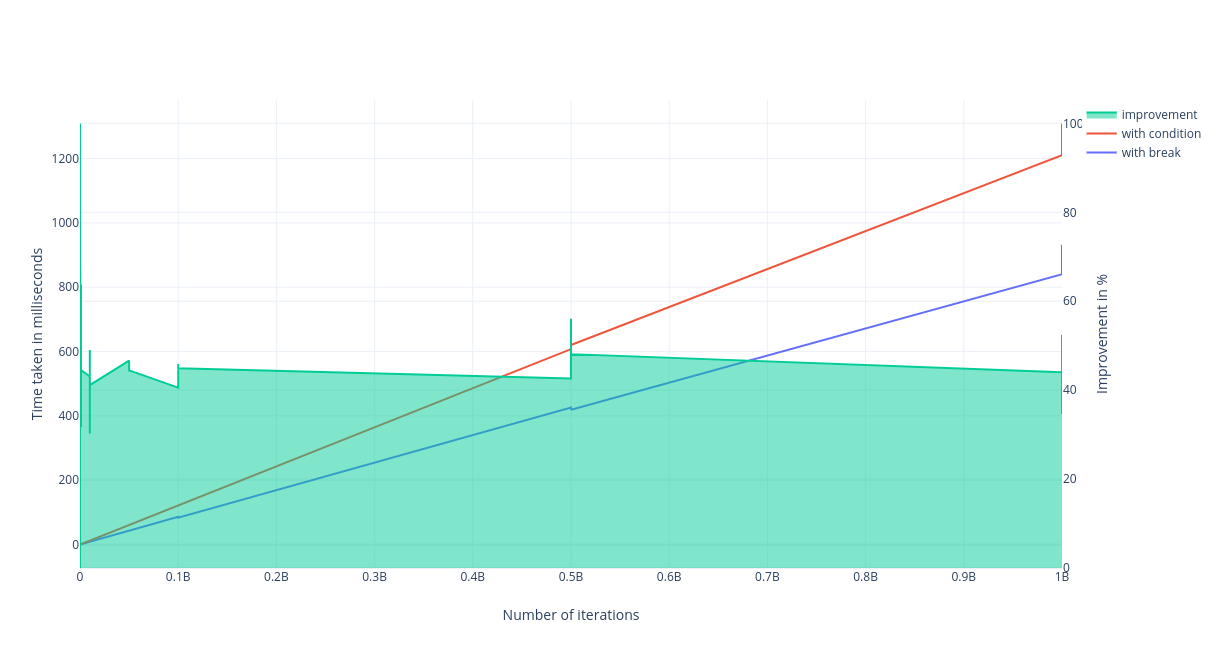 We see that a diverging graph that suggests one approach is significantly and always better than the other. The blue line shows the approach where we break the loop and it is always below the red one which represents the approach of stopping the iteration using condition.

We observe that using break to stop the iteration is on an average 45% better and it does not change with the number of iterations (post 1000 iterations). The raw data used for plotting this graph can be found here.

Using break statement to break the loop is 45% better than using condition to stop the iteration and get out of the loop.

MongoDB is a document based data store and hence pagination is one of the most common use case of it...

If you have written something cool in Python and want to make it installable via pip and easy_instal...

Generating pseudorandom numbers is an interesting problem in Computer Science. In this article, we d...

In this essay, we alter the Python Grammar and allow it run Assignment Expressions without any paren...