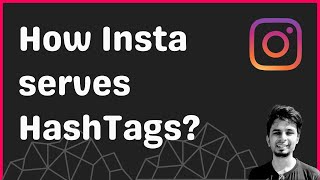 Instagram has millions of photos, and each has tens of hashtags, so how does Instagram efficiently serves hashtags for a search query?

Instagram uses Postgres as its primary transactions database. For each hashtag, it stores the media_count in a table. This allows us to render the Hashtag and some meta information on the search page.

Note: Instagram could also use a dedicated search engine for this usecase, but this usecase is trivial to use something as sophisticated as ElasticSearch. We take a look at how they do it with Postgres.

Executing this query would require the database engine to filter out the hashtags starting with snow and then sort. Sorting is an expensive operation and this query required the engine to sort 15000 rows.

Under high load, this sorting becomes a pain. So, what’s the way out?

The key insight here is the fact that hashtags have a long-tail distribution i.e. most hashtags will have far fewer media counts and while serving we are always ordering by media_count.

Hence, instead of indexing everything, we can simply index the hashtags having media_count > 100 because other hashtags are highly unlikely to be surfaced.

Postgres database has this exact same capability and it is called Partial Indexing. With partial indexes, we can keep only a subset of data in the index.

We can create a partial index on our hashtags table like

With this index, the query we fire would have to scan a very limited number of index entries to spit out the result.

The above query required it to sort only 169 rows, completing its evaluation superfast. This is a classic usecase where we all can utilize Partial Indexes.