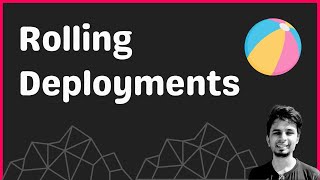 Rolling Deployment is a deployment strategy that slowly replaces the previous version of the application with the new one by replacing the underlying infrastructure.

A key thing to note here is the fact that deployment is incremental in nature which means during the deployment there would be a few servers that are serving the old version of the code and the remaining servers serving the newer version. Hence the changes we push should be both backward and forward compatible.

Rolling deployments are always gradual and graceful, and we typically happen through the below steps

Instead of deploying to one server at a time, we can deploy changes to n servers concurrently. This would complete the entire deployment quicker.

Choosing the appropriate n is critical as a small value would mean the deployment takes ages to complete and a large one would affect the availability during deployment.

An interesting way to implement rolling deployment is to double the infrastructure and then delete the older half.