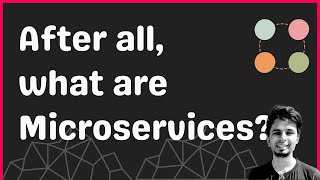 Everyone’s talking about Microservices, but what exactly are they? Are they just a set of functions hosted over a network or something more?

Microservices in simple terms are like the regular functions from our programming language but just a more extensive set of responsibilities and served via a network.

Microservices are no silver bullet, and they would not magically solve all the problems you have. It has its own fair share of drawbacks.

Almost all products start monolith where every feature is put into a single codebase which is deployed as one artifact across all the servers. For example, the code handling payments, notifications, and analytics are all part of the same codebase deployed within the same binary.

Monoliths are always simple to build, develop, test, and scale. Given their simplicity, they are the go-to option for anyone starting up. With a lean team working on monolith would ensure very quick feature delivery.

Migrating from monolith to microservices is a slow process and to start you would club a related set of functions and fork out a service out of it. The process would be repeated for other sets of functions, eventually breaking the entire monolith.

Things to remember while building Microservices

An engineer working on Microservices should not only just focus on engineering; there are so many other aspects to look ...

Why should we have a standard way of building Microservices?