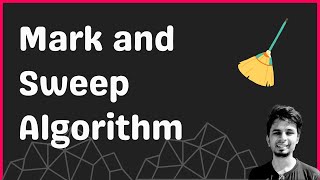 Almost all programming languages support allocating objects in heap and referring them via pointers to another object. This reference creates a small graph of all the references linked to the one root node.

The root node could be a global variable (object) or something allocated on the thread stack, and anything and everything referenced from that becomes the child nodes and the process continues.

When is the GC triggered?

Although the algorithm is primarily split into two phases Mark and Sweep; to build a better understanding we split it into 4.

The first step of this algorithm is to extract and prepare the root list, and the roots could be global variables or variables referenced in the thread stack. These become the seed objects on which we then trigger a DFS.

Mark the roots and proceed

Once we identified all the roots, we mark all the roots as LIVE and proceed with the Mark phase. A super optimization that some implementations apply is to invoke the Mark phase for every root as it would help us keep the stack smaller.

The mark phase is just a Depth First Search traversal on one root node and the idea is to mark every node as LIVE that is reachable from the root node. Once all the nodes are marked, we can conclude that the nodes that remain unmarked are garbage; and the ones to be cleaned up.

The nodes left unmarked are the garbage and hence in the sweep phase, the GC iterates through all the objects and frees the unmarked objects, and resets the marked object to prepare them for the next cycle.