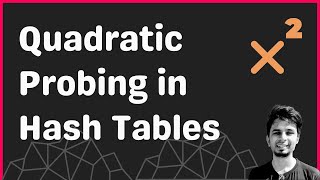 Linear probing is a popular way to handle Hash Table collisions, but is that the only way? Definitely not.

Linear Probing suffers from one significant challenge, and that is clustered collision. With a poor hash function, it is very much possible that some slots are preferred more over others, and upon collision, they are placed next to each other.

Hence, we would see clusters of collided keys forming across the entire hash table, and this is called Clustered Collision. Linear Probing suffers from this the most.

For attempt 0, we get the primary slot h(k) and post that for each attempt we move quadratically through the hash table to hunt for the next available slot.

Because of the quadratic jump, we do not form clustered collisions, instead, we cover a good chunk of the hash table. A simple quadratic sequence would be

Where h(k) is the primary slot we got by passing the key through the hash function and 1, 4, 9, and 16 are the quadratic offsets.

Quadratic Probing has a good locality of reference. When we access a particular slot of the hash table, we are also bringing in neighboring slots to the CPU cache. Upon collisions, when we access a few next quadratic slots, we need not fetch it from the RAM.

The locality of reference is not as high as Linear Probing, but it is decent enough when we observe fewer collisions per slot.