Internal Structure of a Hash Table 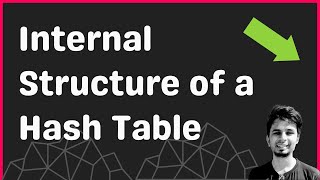 Hash Tables are implemented through simple arrays, but how?

Hash Tables are so powerful, that OOP-based languages internally use them to power Classes and site members. Symbol tables that hold the variables mapped to a memory location are also powered through hash tables.

They are designed to provide constant-time key-based insertion, update, and lookups while being space efficient at all times.

Hash Tables should support storing an object as a key and to power that the keys are first hashed to a big integer range (provided by the user) typically INT32. This hash key is then further used to decide how and where the KV pair would be stored in the data structure.

A naive implementation of a Hash Table would be to create an array of length INT32. To store the KV in it, we pass the key through the hash function, spitting out an integer. We use this key and store the KV pair at this index in the array.

Although this would give us constant time insertion, update, and lookups, it is highly space in-efficient, as we would need to allocate at least 4 * INT32 = 16GB of ram to just hold this array, with most of the slots left empty.

This step is designed and introduced to make our Hash Table space efficient. Instead of having a huge array of length INT32, we keep it proportional to the number of keys inserted. For example, if we inserted 4 keys, then our holding array could be around 8 slots big.

To achieve this, we map the hash key into a small range (same as the length of the array) and place our key at that very index. This allows us to remain space-efficient while sporting fast and efficient insertions, updates, and lookups.

The small limited-size array will not be able to hold numerous keys and hence after a certain stage we would need a larger array to hold the data. This is done by resizing the holding array and is typically made 2x every time it is full enough.