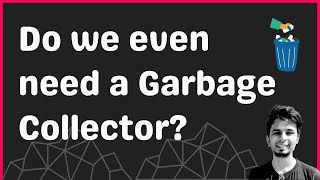 Our programs need memory, typically in the form of variables and objects, to do their job. The objects are either allocated on Stack or Heap.

A variable allocated on the heap is typically done through functions like the “new” or “malloc”. The object space allocated for such entities is in RAM and they outlive the function scope and execution, and hence they need to be explicitly freed as we are done with it.

Why do we need a Heap?

Objects assigned on Heap need to be garbage collected, but why do we need the heap in the first place? There are 3 main reasons:

Primitive programming languages like C and C++ do not have their garbage collection instead expect the developer to not only allocate the object but also deallocate it explicitly. Hence we see the functions like “malloc” and “free”.

The objects we allocate using “malloc” will continue to exist unless they are reclaimed using “free”. The explicit need to “Free-ing” the allocated object is called Explicit Deallocation.

Although cleaning up the mess we created is a good idea, it is not reliable that we rely on the engineers and developers to always free the objects they allocated. Hence this gives rise to the need for automatic cleanup of unused variables- automatic garbage collection.

Hence, to reduce human error, and make the process more reliable and performant the runtimes of the programming languages implement their automatic garbage collection.