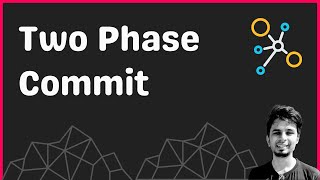 Say, we have a distributed database with three nodes, and we want our “commit” to succeed when it is successful in all three nodes otherwise we “abort”.

This is a classic Distributed Transaction.

Say have the transaction, and N processes are participating. One of the N processes becomes the coordinator and it coordinates until the end of the protocol.

Process A broadcasts its decision to all the nodes in the network, and thus the entire network either commits or aborts; thus completing the transaction.

If the coordinator fails before the start of phase 1, then since the consensus did not even start, all the nodes can safely abort.

If the coordinator fails after initiating phase 1, some of the nodes might have sent their local decision and would be waiting to hear back the final decision. These nodes would remain blocked.

No one could proceed, because the new coordinator does not know if the crashed node was committed or aborted.

The Two-Phase Commit looks super-simple but it has a major flaw in the failure scenarios, and hence distributed systems take even finer steps to remediate and reach a consensus more robustly.