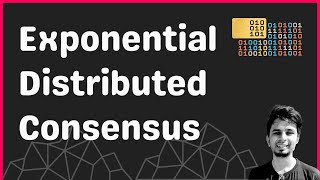 The core idea of the Exponential Information Gathering Algorithm is to gather a large amount of information from the network and then apply some decision rules to reach a consensus.

EIG algorithms require an EIG Tree that is like a Trie and is constructed level by level. If there are n nodes in the network and the level of the tree is k then the leaf of the tree contains all k-length permutations of n nodes.

If a node a received a message from a path b, c, d then the incoming message (value) is stored along the path b, c, d at the node a.

Thus, at each level of the tree, the number of children of each node reduces by 1. The root of the tree is labeled EMPTY, and it has n children, say A, B, and C.

Each node in the next level will have 2 children. A will contain AB and AC while B will contain BA and BC, and C will contain CA and CB. Thus we see at level 2 the leaves contain all 6 2-length permutations of A, B, and C.

We assume at max f nodes would fail and hence the algorithm runs for f + 1 rounds. In each round, a new level of EIG Tree is constructed. Each node independently constructs the level but every single node will have formed the exact same EIG Tree.

Every process i, sends its value to the entire network including itself. Upon receiving the value v from j, the nodes update their own trees and add nodes tree[j] = v.

At the end of round 1, every node will have an EIG tree of depth 1.

Every process i, sends all pairs (x, v) from the k - 1 level in the network where i is not in x. This would lead to the construction of the permutation tree.

After the f + 1 rounds, each node will have the exact same copy of the EIG Tree of depth f + 2.

The algorithm stops after the f + 1 rounds, and each node simply traverses through the entire EIG Tree to find all distinct values it holds.

If the number of values is 1, the node decides that as the final value. If the distinct values are many, then the node may choose the default value.

So long as we have a total ordering of the values, we can define our own decision strategy.