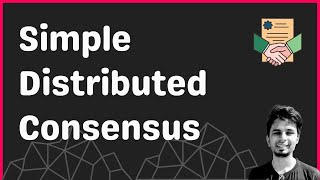 The core idea of the FloodSet algorithm is to keep track of all the values seen so far and use some decision rule such that all nodes choose the same value.

Every node maintains a set W to hold all the values seen so far. If we assume at max f nodes would fail then the FloodSet algorithm runs for f + 1 rounds, giving chances for processes to fail.

Every node starts with W = {v}, its own value. In each round, every node broadcasts W in the network. When a node receives the W from other nodes it updates its W by doing a set union.

After the f + 1 rounds, every node will have the same W that holds all possible values of the network participating in the transaction.

The decision-making is decentralized. If W contains just one value then the node converges to that value. If it contains more than one value, the node defaults to the last value.

So long as we have a total ordering of the values, we can define our own decision strategy.