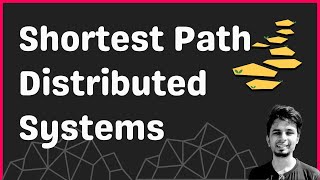 A key point to consider here is the fact that “shortest” is not only about the distance, but it can also be about the congestion, time, cost of communication lines, cable infra, and much more.

In a distributed network, where nodes are connected via paths/edges having some weight assigned, find the shortest path from a specific source to all the nodes

In this gist, we discuss a synchronous approach which means every node moves forward in the algorithm in sync. There are ways to achieve this, but the implementation of synchronous behavior is out of the scope of this gist.

Because it is a distributed network no node knows the entire topology and weights. They just know

Every node keeps track of dist which holds the shortest distance to it from the source i0. Initially, dist at i0 will be 0 and dist at all other nodes will be inf.

At every round, all the nodes will send their dist across all of their outgoing edges to their neighboring nodes. Every node i upon receiving an incoming dist from its immediate neighbor j compares

after comparing, if the incoming distance plus the weight of the connecting edge is smaller than its own dist it means that the distance from i0 to the current node could be shorter and hence, the node updates the parent suggesting that the shortest path from i0 to i goes through j.

We require n - 1 rounds to complete the algorithm, the time complexity of Bellman-Ford Shortest Path in Distributed System is O(n). At every round, every node sends dist message across all of its edges to its immediate neighbors, the communication complexity becomes O(n x |E|).