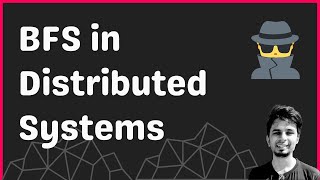 In this gist, we discuss a synchronous approach which means every node moves forward in the algorithm in sync. There are ways to achieve this, but the implementation of synchronous behavior is out of the scope of this gist.

The output of this traversal is a Breadth-First Directed Spanning tree that covers all the nodes but a subset of edges. This output is important because we can use this spanning tree as a foundation for other applications and algorithms.

The node i0 initiates the BFS and it sends the search message to its neighbors. The nodes can either be marked or unmarked. If marked, they are part of the spanning tree already.

When an unmarked node receives the search message,

In the next round, the nodes that received the message in the previous round participate, and send search messages to their neighbors, and the nodes receiving the messages do the needful.

Eventually, every node will be receiving the search message from some or the other node and will be part of the spanning tree.

To achieve this, each node has to respond to the search message with a parent/non-parent message that tells the node if it was chosen to be the parent or not. This way, every node will know its parent and children in the spanning tree.

The most important part of any distributed algorithm is its termination. How would the node know that BFS is done?

The approach we use is called Convergecast.

The idea is to respond to the search message only when it received responses from all its children. This ensures that the node initiating the BFS would receive the messages from its children only after all the nodes respond to their corresponding parents.

After constructing the BFS Spanning Tree, we can use this constructed path to