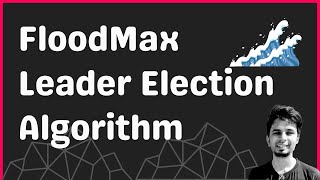 Leader Election should work with any topology and hence we take a look into an algorithm called FloodMax.

The Flood Max Algorithm Flood Max works with a network that is arbitrarily connected. It assumes that every node is given a comparable UID that may be randomly allotted and every node knows the network’s diameter.

The Flood Max algorithm is designed to elect the node with the maximum UID as the new leader and the core idea is to flood the network with the Max UID until the value converges.

The election process happens synchronously, which means every node moves forward in the algorithm in sync. There are ways to achieve this, but the implementation of synchronous behavior is out of the scope of this gist.

The algorithm stops after completing rounds equal to the diameter of the network. In each round, every node

After completing the diameter number of rounds, each node will have the max UID it has seen so far which will also be the global maximum; thus every node will know who is the leader of the network.

Another optimization to reduce the communication is to NOT send the Max UID in the direction of the neighbor from which it was received.