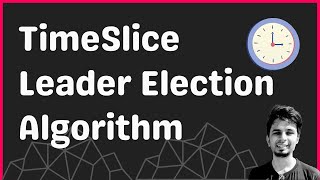 TimeSlice algorithm for leader election is highly impractical, unbounded, yet an interesting algorithm to understand.

The election proceeds in phases 1, 2, 3, and so on. Each phase consists of n rounds. Because the algorithm is synchronous, each node knows when the algorithm is proceeding with rounds and phases.

In phase 1, the node with UID 1 will send the message with its candidature across to the next node in the ring. If no such node exists, then no message is sent.

Thus, for n rounds within phase 1 there is void silence in the network. Then beings the phase 2.

Hence, we see that the messages will be sent across the ring only when the phase i beings where i is the smallest UID in the network. For all (i - i) * n rounds, there will be void silence in the network.

When phase i begins the node with UID i will know that it is the new leader and it initiates the message and sends it to the next neighbor. For n successive rounds, the message is sent across the network and thus all n nodes know about the new leader i.

The algorithm thus elects the node with the minimum UID as the new leader in just O(n) messages but takes time proportional to the O(n*i).

If the minimum UID is a large integer, then the algorithm will take a longer time to elect the leader, and hence it is unbounded on the number of nodes in the network.