Dissecting GitHub Outage: Downtime due to an Edge Case 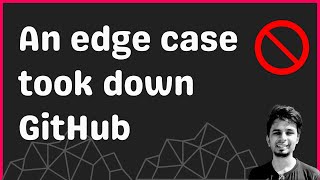 An edge case took down GitHub 🤯

GitHub experienced an outage where their MySQL database went into a degraded state. Upon investigation, it was found out that the outage happened because of an edge case. So, how can an edge case take down a database?

The outage happened because of an edge case which lead to the generation of an inefficient SQL query that was executed very frequently on the database. The database was thus put under a massive load which eventually made it crash leading to an outage.

Could retry have helped?

Now, we take a look at a fictional example where an edge case could potentially take down a DB.

Say, we have an API that returns the number of commits made by a user in the last n days. The way, this API could be implemented is to get the start_date as an integer through the query parameter, and the API server could then fire a SQL query like

In order to fire the query, we convert the string start_time to an integer, create the query, and then fire it. In the regular case, we get the correct input and then compute the number of commits and respond.

But as an edge case, what if we do not get the query parameter or we get a non-integer value; then depending on the language at hand we may actually use the default integer value like 0 as our start_time.

There is a very high chance of this happening when we are using Golang which uses 0 as the default integer value. In such a case, the query that gets executed would be

The above query when executed iterates through all the rows of the table for a particular user, instead of the rows for the last 7 days; making it super inefficient and expensive. The above query would put a huge load on the database and a frequent invocation can actually take down the entire database.

Ways to avoid such situations