Introduction to BitTorrent and the problem it beautifully solves 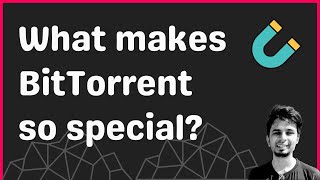 BitTorrent is a peer-to-peer protocol that makes the distribution of large files easier, faster, and more efficient.

To download a file client makes a request to the server, and the server after processing the request responds with the file.

Is there a way where we can download the file faster? without overwhelming the server? P2P networks like BitTorrent solve this problem beautifully.

A P2P network is a network of nodes called peers where each peer is equal and can initiate communication with any other peer. Such a network has no SPoF and hence even if we remove a node, the network continues to function.

There may be a central entity in the network to hold meta information but the core work is still done by the peers. Such a network is called a Hybrid P2P network.

BitTorrent is built on the principle of not downloading files from just one machine, instead, it encourages us to download pieces of the file concurrently from multiple machines.

Split the file into small pieces and distribute it across the network. Instead of downloading the complete file from one server, download the pieces of the files from different machines, concurrently.

The film is split into equal-sized pieces, and each piece is further split into blocks. In one transfer a block is transferred but a node can only serve after it has the entire piece.

Each peer maintains a list of peers to whom it can reach and download the pieces. Out of all the peers in the peer set, a node can only send data to a subset and this subset of peers is called Active Peer Set.

A node having the complete file is a seeder while a node currently downloading the file is a leecher. A leecher can download the pieces from seeders or other leechers.

The new and popular files will have a lot of seeders and hence a new node joining the cluster will be able to download them much faster. If the file is old and unpopular, there will be few seeders and hence we would see a slower download.

Exploiting and stealing from the BitTorrent network

Stealing is bad, but in a P2P network, it is a cakewalk. In this 7th video of the BitTorrent Internals series, we take ...

Kademlia is a Distributed Hash Table implementation and it is used as an overlay network for BitTorrent. Instead of talk...

Performance of the BitTorrent network relies heavily on the order in which the pieces are requested by the peers. In th...

The Choke Algorithm that powers BitTorrent

One of the most important algorithm that powers BitTorrent is The Choke Algorithm In this 4th video of the BitTorrent I...